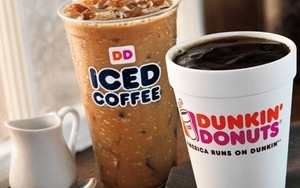 Increased competition in the breakfast and coffee segments amid still-restrained consumer spending added up to mixed results for Dunkin' Brands in its fiscal quarter ended Sept. 30.

U.S. comparable-store sales for Dunkin' Donuts were up by 2% and comps at Baskin-Robbins U.S. were up by a strong 5.8% — versus competitor McDonald's' 3.3% U.S. comp sales decline (and 30% overall profit decline) in its third quarter.

But Dunkin' Donuts' U.S. comps performance — which was down versus the year-ago quarter's 4.2% growth — did not meet analysts' expectations; nor did its revenue performance. Furthermore, the parent company warned that it now expects it to be a "challenge" to meet the 2% lower-end range of its previously announced comp-sales growth expectations for the year. Last year, comp sales rose 3.4%.

In addition, international comp-store sales were down at both Dunkin' Donuts (-2.9%) and Baskin-Robbins (-1.5%).

Dunkin' Brands CEO Nigel Travis acknowledged that the Q3 comps were "disappointing," and said that he is "concerned about the consumer," because even the decline in gas prices don't seem to be spurring increased spending, as it has historically.

John Costello, president, global marketing and innovation for Dunkin’ Brands, said the core QSR market is now "much softer," adding that "everybody [is] jumping into that sector with increased price discounting.”

Along with the ongoing battle with McDonald's, new or expanded breakfast competition includes Taco Bell and Chick-fil-A. And while Starbucks and Chipotle Mexican Grill, which are higher priced and attract a more upscale demographic, have had very strong years to date, most QSRs serving the still-financially-struggling mainstream have seen their performance slow and their stock prices decline this year.

"The only coffee and doughnut company that is having a solid year on Wall Street is Canada-based Tim Hortons – and that's mainly because Burger King has agreed to buy it," observed Bloomberg Businessweek.

Still, Costello stressed that Dunkin' Brands is still building rather than losing share, and that it remains "encouraged about the fundamental positioning and the appeal of our products and our general customer proposition.”

Indeed, Dunkin' Brands continues to expand its locations, adding 197 net new restaurants worldwide during Q3 (including 120 Dunkin' Donuts stores in the U.S.), with a total of 685 to 800 net new worldwide locations planned for the full year.

With its recent expansion into Southern California, Dunkin’ Donuts now has more than 7,900 locations in the U.S., and believes there’s room for 9,000 additional locations, at minimum, Businessweek noted.