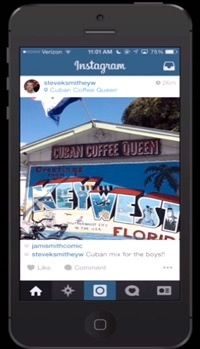 Ahead of Facebook’s latest earnings call, new data shows that Instagram is more popular than ever among brand marketers.

During the third quarter of 2014, 86% of top brands incorporated Instagram into their marketing strategies, which represented a 15% year-over-year increase, according to social media measurement start-up Simply Measured.

Brands who posted at least once a day have doubled since 2012, while 73% of brands post at least one photo or video per week, the researcher found. Simply Measured also found a clear correlation between brands that maintain an active presence on the platform and increased user engagement.

“With more brands engaging larger audiences and tactics becoming more sophisticated, Instagram users are more receptive to marketing content on the network,” according to Kevin Shively, author of the report.

“Only 36% of brands include at least one @mention, highlighting an area that could easily be leveraged for brands looking to increase audience size,” according to Shively.

For its findings, Simply Measured analyzed Instagram activity of the Interbrand 2013 Top 100 Brands, which are ranked based on market, competitive and financial data.

This past year, along with various efforts by Levi’s, Mercedes-Benz, Ben & Jerry’s, and other partners, a $40 million ad deal with Omnicom showed Madison Avenue’s confidence in Instagram. Still, since introducing advertising late last year, the Facebook unit has been careful not to inundate its users with brand messages.
brand marketing, instagram, social media
Next story loading