High-Res Streaming Video In Your Pocket And A Battle Royale 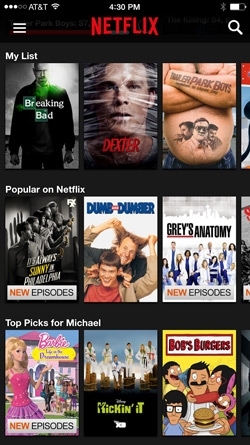 Did you know that Netflix has over 50 exclusive shows available on its streaming service? In addition to having more shows available than Hulu Plus and Amazon, it has incredible original content such as “House of Cards.” Netflix continues to innovate and adapt to a market that where cord-cutting is accelerating and where consumers want more options and they want it delivered on their mobile devices.

Netflix may have gotten knocked in its most recent quarterly earnings, however, I believe Reed Hastings is wisely focused on long-term growth vs. short-term gains, such as quarter-over-quarter subscriber growth — he knows it’s coming and is playing the long game. If you doubt this, consider that HBO recently announced the upcoming launch of a stand-alone online service in 2015. Richard Plepler, CEO of HBO, said, “There are 80 million homes that do not have HBO. We will use all measures to go after them.” The winner in this battle between these entertainment Goliaths will be the consumer. Our demands for more content delivered via the Internet and on our mobile devices are instigators in encouraging the battle and the marketplace innovation.

Netflix has a history of being nimble and able to quickly adapt to market factors, so I tend to place my bets on them. Another innovation announced this week is that its iOS app now supports the larger screen size of the iPhone 6 Plus and its 1,080-pixel video resolution. New iPad 3 owners will also enjoy the app update as well, since those devices support 1,080 pixel resolution, too.

While this may seem like a small detail, it’s a big deal. Previously, Netflix streaming was limited to 720 pixels on the iPhone. Screen size may have gotten a lot of attention, but iPhone 6 has faster download speeds via wireless carrier LTE as well as supporting more advanced wi-fi. These two improvements mean more people are willing to watch streaming video content on their devices. What these features also mean, aside from continuing to prove that Moore’s Law is alive and well, is that consumers that may have been waiting on the sidelines to cut the cable cord, have more incentive to make the jump this holiday season. Netflix’s blog noted, “All you need is a good wi-fi connection”. And at this point, who doesn’t have a good wi-fi connection?

Some of you reading this may be ready to raise the bandwidth issues associated with your Internet provider (e.g., Time Warner, Comcast, etc.). Netflix has not been shy about letting consumers know that its ISP/cable provider is part of its Open Connect program. Time Warner (the largest ISP in the U.S.) customers know this all too well, since they and Netflix have locked horns about bandwidth and peering agreements that have been unresolved and leave Netflix customers on that network out in the cold from seeing some HD content. Some of these issues still exist today for certain ISPs, such as Time Warner. President Obama’s pitch this week about net neutrality should certainly have an impact on these bandwidth, peering agreements/disputes between pipe owners and content providers. As net neutrality becomes a mainstream news topic and gets more attention from consumers, I believe cable companies/ISPs, typically seen as “villains” will bend to consumer demand with nudges from Netflix, HBO, Hulu, Showtime and a raft of other content providers.

As marketers, we have to remain up-to-speed on these developments, to understand where we can find opportunities to connect with our audiences, especially as they accelerate their cord-cutting and more eyeballs move away from appointment-based programming. These marketplace shifts are impacting how we buy media today and why marketers need to understand mobile as well as how APIs, SDKs and other integrations with media buying and bid management platforms impact media strategy.