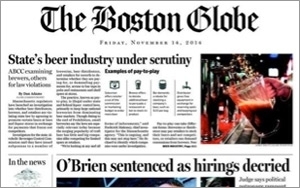 Print advertising can still get people talking. That’s the most positive summary for the reaction to The Boston Globe’s full-page wrap ad for the University of Massachusetts on Friday, which took over the entire front page of the newspaper except for the familiar Gothic script nameplate itself, alerting readers that this was indeed The Boston Globe.

The unavoidable UMass cover ad, featuring white text juxtaposed on a vivid red-and-blue background with no other images or graphics, read simply, if not syntactically: “One university woke up thinking about Massachusetts this morning. UMass Here for a reason.”

The message was clearly marked as an advertisement and could in no way be mistaken for editorial content. The other three pages of the wrap carried additional promotional messages from UMass, again with a format and graphic treatment that clearly distinguished them from editorial content.

Still, some readers expressed surprise and concern about the newspaper’s decision to turn its entire front page over to an advertiser, prompting newspaper execs to promise more consultation before they run similar ads in future. Critics also noted that last weekend the Globe’s Sunday edition included a “special supplement” in the form of a gloss magazine-style insert promoting UMass, which wasn’t so easily distinguished from the newspaper’s editorial content.

The Globe has been exploring new monetization options since Boston business magnate John Henry acquired the newspaper from The New York Times Co. last year. In March, the newspaper introduced a metered access system that allows occasional readers to read some content for free before requiring them to buy an online subscription. The metered model replaced its previous paywall strategy, implemented in September 2011.

The Boston paper isn’t the first newspaper to sell cover wrap ads. Back in 2010, the Los Angeles Times ran a cover-wrap ad from Disney for "Alice in Wonderland," juxtaposing an image of the Mad Hatter on what appeared to be a real front page from the newspaper.

This and a subsequent section wrap for King Kong earned a rebuke from the LA County Board of Supervisors. Also in 2010, USA Today featured a front page wrap carrying an ad for the Jeep Grand Cherokee.