Tube Of Plenty: Time To Count Our TV Blessings And Give Thanks 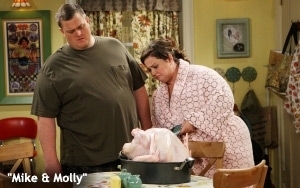 And now, with another Thanksgiving holiday upon us, let us give thanks to all that TV gives us all year long.

Thank you, TLC (formerly The Learning Channel), for airing a binge-worthy marathon last Sunday of your timely reality series about immigration, “90 Day Fiance,” which sheds much-needed light on the challenges some people face when they come to the United States from a foreign land under temporary three-month visas and then have only 90 days to find a mate to marry so they can stay longer.

Thank you, Bravo, for all of the “Real Housewives” series you air constantly, and for making them so similar that we can no longer distinguish one from the other.

Thank you, CBS, for doing what NBC never seemed able to do: Choreograph what is shaping up to be an ultra-smooth transition in late-night when Colbert replaces Letterman next year.

Thank you, HGTV, for coming up with an idea for a TV show, “House Hunters,” which consists of nothing more than ordinary people looking at homes to buy, and turning it into a series that has lasted 15 years.

Thank you, PBS, for “Antiques Roadshow,” another deceptively simple idea (adapted from a British original) that has lasted 17 years.

Thank you, HLN, for filling up so many hours with “Forensic Files,” one of the two best true-crime series on television.

Thank you, A&E, for the other one -- “The First 48” -- a show that is so true-to-life and hard-boiled that it makes you unable to watch scripted cop shows ever again.

Thank you, NBC, for trying your very best to turn around “The Today Show” and sticking with Matt, Savannah and Al.

Thank you, Netflix, for agreeing to continue “Longmire” for another season after A&E dropped it.

Thank you, HBO, for shrewdly deciding to conclude both “Boardwalk Empire” and “The Newsroom” with mercifully short final “seasons.”

Thank you, Fox, for “The Simpsons.”

Thank you, ABC, for giving your Thursday nights to Shonda Rhimes.

Thank you, Turner Classic Movies, for never (yet) succumbing to the temptation to carry commercials, for having the bravery to air so many obscure and long-forgotten movies and, basically, for just being there.

Thank you, local TV news, for always making it seem as if a catastrophe is on the way every time it looks like rain.

Thank you, Melissa McCarthy, for continuing to do “Mike & Molly,” even though you’re a big movie star now and could probably get away with bowing out of the television thing.

Thank you, cable news channels, for always being fair and balanced.

Thank you, MeTV, for airing “Perry Mason” every weeknight at 11:30.

Thank you, TV industry, for giving a TV columnist something to write about every single day.