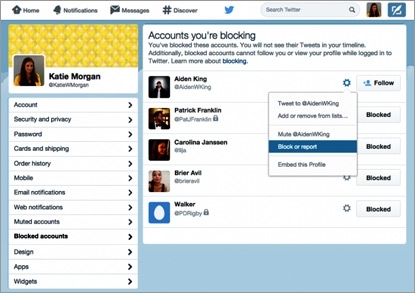 Continuing to crack down on bullies, Twitter on Tuesday announced improvements to its in-product harassment reporting and “block” features.

“We’re improving the reporting process to make it much more mobile-friendly, require less initial information, and overall, make it simpler to flag Tweets and accounts for review,” Shreyas Doshi, director of product management, User Safety, explained in a blog post.

Twitter also set out to improve the reporting process for those users who observe abuse, but aren’t receiving it directly.

To achieve faster response times, Twitter has also made what Doshi called “the first of several behind-the-scenes improvements” to the tools and processes that are designed to review reported Tweets and accounts.

A new “blocked accounts” page — which you can get to from the settings menu on Twitter.com — shows those accounts that users have blocked. Going forward, Twitter plans to add more controls and features to this page in the coming months.

This summer, Twitter was publicly shamed for allowing some lowlife users to direct harassing messages toward Zelda Williams following her famous father’s suicide. In response, the social giant vowed to change its policing policies.

According to Doshi, Twitter relied on its users to help police the activity of the entire community. “Everything that happens in the world happens on Twitter — to the tune of more than 500 million Tweets every day,” Doshi noted. “That can sometimes include content that violates our rules around harassment and abuse, and we want to make it easier to report such content.”

Despite its bullying problem, Twitter has proven itself to be a particularly friendly platform for advertisers. Indeed, a full 70% of Interbrand 100 companies have at least 100,000 followers — up from 58% in the fourth quarter of 2013 — according to recent findings from social media analytics and measurement start-up Simply Measured.

Even more encouraging for Twitter, users appear to be more comfortable than ever engaging with brands on the social network. During the third quarter, Simply Measured recorded 7,266,497 @replies, retweets, and favorites of brand tweets — excluding brand-posted retweets and @replies. As a result, engagement with brand tweets was up 83% over the fourth quarter of 2013.