Obama On 'Colbert': Comedian In Chief Jokes While World Burns 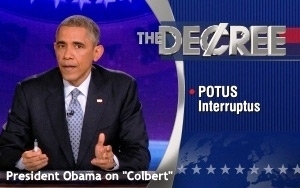 Sorry, but I prefer my presidents to be gloomy and brooding.

Or at the very least, I prefer they avoid appearing on comedy shows. This puts me in an apparent minority (possibly of one) because audiences, presidents and the late-night shows they appear on seem to love these “humanizing” media opportunities.

President Obama sure seemed to enjoy himself last night on “The Colbert Report” on Comedy Central. Stephen Colbert enjoyed himself too. So did Colbert’s audience of young people who crowded into an auditorium at George Washington University for this special show originating from Washington. (You can watch the whole thing here.)

I even enjoyed myself at times -- against my better judgment.  Maybe I’m a killjoy (prone to killing my own joy more than anyone else’s), but amid all the merriment, I couldn’t help thinking about the mess the world is in and wondering: Is it appropriate for the President of the United States to be cavorting on a late-night comedy show? Shouldn’t he be holed up in a study somewhere in the White House burning the midnight oil to read reports, write correspondence and mull over possible scenarios for solving the world’s problems?

On “Colbert” last night, Obama was the sole guest. In the first portion of his appearance, he was the star of a lengthy comedy bit in which he replaced Colbert, and seated in Colbert’s chair, recited a monologue from a TelePrompTer that was originally intended for Colbert to recite.  Since it was a Colbert monologue, it was highly critical of the president.

Thus, you had President Obama delivering a critique of himself and his policies -- most notably, ObamaCare. People seem to love this kind of thing. It makes them feel warm and fuzzy when they get to see their President joking around. And when a president can deliver lines that poke fun at himself, people really approve of that too.

Presidents and their handlers are no doubt aware of this phenomenon, which is why the President goes on the late-night shows to begin with. President Obama has been somewhat of a pioneer in this area, the first President to appear on a slew of TV talk shows while in office -- including the Leno and Fallon “Tonight” shows, the “Letterman” show, “The Daily Show,” “The View” and “The Oprah Winfrey Show” in 2011.

The reasons why a President would appear on these shows are obvious: He doesn’t get asked tough questions, and even if he did, he always gets ample time to have his say. Plus, studio audiences, who have already been warmed up and primed to applaud and laugh whenever possible, are extremely welcoming and admiring. It helps when an audience is on the younger side, such as those who attend tapings for “Colbert” and Jon Stewart, but the President is practically guaranteed an ovation (usually standing) from any studio audience lucky enough to have scored tickets on the day he is scheduled to appear, no matter what the median age of the ticketholders.

In the second half of his appearance on “Colbert” last night, the President had the opportunity to expound on his healthcare initiatives (reciting how many millions of people have signed up) and on his recent executive order on immigration (he made his oft-repeated claim that it would have not been necessary if only Congress had passed an immigration-reform bill).

So what’s wrong with a president having a little fun? Nothing, really. But I can’t help thinking at such times about past presidents and how they wouldn’t be caught dead appearing on a comedy show while in office. You didn’t see Eisenhower on Steve Allen’s “Tonight Show.” Or Kennedy with Jack Paar; or Johnson, Nixon, Ford, Carter, Reagan or George H.W. Bush on “Johnny Carson”; or Clinton or George W. Bush on “Letterman” or “Leno.”

Maybe it just wasn’t the fashion in those days for presidents to reveal their lighterhearted selves in so public a manner as appearing on -- and in some cases, participating in -- a comedy show. Appearing on a comedy show, by its very nature, makes a president seem unserious, which can be unsettling to some (or at the very least, unsettling to me) who worry generally that when a president assumes the role of Comedian In Chief, he isn’t taking his job and its responsibilities seriously.

Or maybe I just don’t get the joke.