I Give Under Armour's Marketing A Big Fat Z.E.R.O. 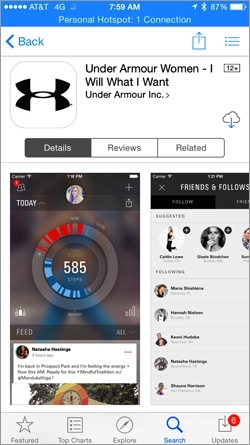 Under Armour has received accolades for its marketing, including a term as Marketer of the Year.  To be sure, “I Will What I Want" is a great campaign, but at the end of the day, it’s no better or worse than anything Nike, Reebok or Adidas have done with their aspirational advertising.

Personally, I’m overjoyed that Under Armour is being recognized -- selfishly, because it's the official  sponsor of my English football club, Tottenham Hotspur. Under this partnership, Spurs have made several trips to the U.S .and given their fan base unprecedented access to their (my) beloved team and players.

In fact, I think the company deserves even more credit than it's been given, due to five key reasons.

1.     Sales are up -- way up, led by four consecutive quarters of revenue growth of 30% or more.  Too often we shirk or talk our way out of the all-important accountability of our marketing. We either give ourselves false credit for short-term gains or mitigate our ineffective marketing with a bunch of “external” excuses. One year is a pretty good period of time to judge performance; the causality between marketing and sales should be fairly transparent under these conditions

2.     The company has done (and I’m not sure how) a magnificent job courting youth. My 11-year-old son and his entire social and sporting base is pretty much dripping in Under Armour from head to toe.

3.     Under Armour has also courted women.  I don’t think people realize how massive the female vote is when it comes to a healthy living and active lifestyle today. If you take a walk down Main Street in Westport, Conn., you’ll see Nike, Lululemon and at least one to two competitors to Lululemon!

4.     Innovation beyond the product. At a time where startups like OmSignal are manufacturing wearable workout wear -- and no doubt all the big boys will be swimming in this space soon enough -- Under Armour did the Evol8tion two-step “What if Kodak acquired Instagram?” and acquired the powerhouse  app MapMyFitness/MapMyRun/MapMyRide. I use MapMyRun myself and I was pretty impressed that Under Armour went for what I think is the leader in the space. The company has been pretty thoughtful and calculated in terms of the transition, branding and rollout of this partnership. In addition, following from the earlier point, Under Armour also launched a separate integrated app  dedicated to women. I wonder what Reebok and Adidas are thinking right now? All I know is that the remaining apps in the same consideration set just added  a “Zero” to their valuation.

5.     Ultimately, Under Armour has demonstrated that it's a perfect Z.E.R.O. Paid Media Marketer. Its $18 million in measured media ( Z.E.R.O. isn’t free; nor is paid media going away) is just over a quarter of Nike’s (which in of itself is not that excessive) and might as well be Z.E.RO. in today’s noisy, cluttered, inflated and expensive marketplace. Under Armour truly has done a fantastic job of dialing up advocacy amongst its zealots, innovating with entrepreneurs, and maintaining a customer-centric approach to its retention.

So kudos to the marketing team at Under Armour. I give you a big fat Z.E.R.O. for your marketing efforts -- and believe me, that’s the highest compliment you could get!