A few weeks back, I wrote a post about the growing dominance of streaming video and HD mobile offerings from providers such as Netflix, Hulu and HBO and the rapidly growing use of mobile devices to watch high quality video on the go. Several recent articles on the topic and the evolving strategies playing out continue to make this an exciting race to watch.

As the streaming story continues to rapidly develop, so does the revenue story for video. A recent report from Henry Blodget highlighted some very telling revenue growth numbers that will give pause to even the most hardened traditional media person you know. For starters, he pointed to a Nielsen chart that showed the steady decline of Primetime Household TV Ratings (big four U.S. TV Networks) from 6.2 in 2008 to a 5.5 in 2013, with a trajectory in steep decline. That trend will not reverse and it’s growing bad news for the networks. And it’s why the bundling at the upfronts will continue to get more sophisticated.

Always fish where the fish are and money always follows the eyeballs — two sayings we are all probably tired of hearing but also know they are truisms. The demise of print revenue is a perfect proxy for broadcast. As ad spending migrated to digital, print revenues fell off a cliff as did circulation rates. For many years broadcast TV has shrugged off their digital counterparts, akin to annoying gnat — except now it’s not a single gnat, it’s a swarm. And to be fair, it’s not just the big four networks; cable and premium cable services are in the same boat. 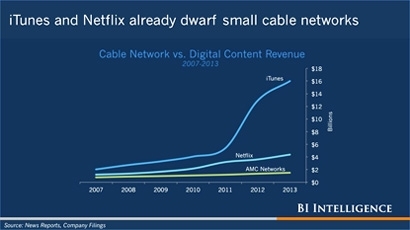 As mentioned in my last post, services such as Netflix are seeing tremendous growth. Netflix has more U.S. subscribers than HBO, and cord-cutting is accelerating beyond Millennials. YouTube and Facebook reach more young audiences than any cable network. This audience growth and reach has eroded the standing argument from traditional media planners that digital (video) is unable to cume audiences as fast as traditional broadcast. And what follows audience … revenue.

Digital video revenue is nearly the inverse of the broadcast audience decline charts. For example, YouTube revenue is pointing up and to the right, and stands at just north of $5 billon, while CBS continues to decline, although still ahead with over $8 billion. When will those revenue lines intersect? 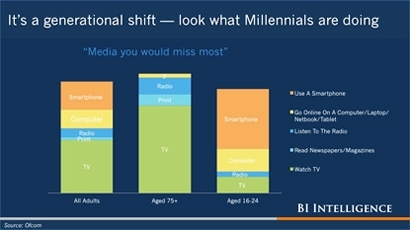 With nearly half of U.S. TVs connected, cord-cutting on the rise and the continued growth of streaming services, I’m certain we will have a short wait for digital video to overtake broadcast network ad spending. And with predictions for a strong holiday shopping season, I’m sure a lot of stocking stuffers will be video streaming services and devices to accompany all the new phones, phablets and tablets. I’m already looking forward to seeing the post-holiday bump in device sales and stream services subscriptions.

Marketers rarely get such great insights into marketplace developments and how to think about adjusting advertising investments for the new year. Luckily, marketers can use the decline of print media as a proxy for the decline of TV. Where will you find opportunities for investment in the disruption that is happening in digital video?