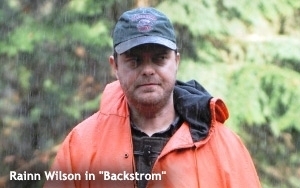 Fox throws the concept of good taste out the window and under the bus with its ad campaign for a new detective series starring Rainn Wilson.

Surprised that a TV network would resort to off-color slang to promote a new TV show? If you’re surprised by that, then you’ve been living under a rock. In the last few years, various TV networks have not hesitated (or maybe they have hesitated, then did it anyway) to promote their shows with words and phrases that were once verboten.

This new Fox show is called “Backstrom,” premiering Jan. 22. It stars Wilson as the title character -- an irascible, unkempt and somewhat bigoted homicide detective in the Portland (Ore.) police department. He has been adapted from a character created by Leif G.W. Persson, a Swedish author of crime fiction. For this American TV series, Portland, Ore. is apparently a stand-in for Stockholm.

On the Fox show (as in the books, presumably), Backstrom is not an easy guy to like. In fact, if you were in the seventh or eighth grade, you might call him a “total dick.” And that is exactly what the adolescents in the Fox promo department are reportedly calling him in the digital-billboard ads they have produced to promote the show.

Their brilliant creative work: “Brilliant detective, total dick.” Oh, I get it -- they’re applying the word “dick” here in its usage as a synonym for “detective,” like in the old W.C. Fields movie “The Bank Dick.” Well, that movie happens to be from 1940.

More recently -- in 1971! -- the word came up again in the “detective” context when Isaac Hayes used it in the theme from Shaft. His lyrics -- which were a whole lot cleverer than Fox’s slogan -- went like this: “Who’s the black private dick that’s a sex machine to all the chicks?” Hayes sang. “Shaft!” sang his backup singers. “You’re damn right!” Hayes replied.

Meanwhile, here in 2014, the word “dick” is commonly used a lot less artfully. Or is it? I am sure some will argue that if Fox’s posters and billboards with this “Total dick” tagline get attention and are remembered, then this choice of wording was successful. In fact, usually a column like this one can count on at least one commenter weighing in with the opinion that if I’m writing about this advertising and paying attention to it, then that’s a sign right there that the advertising is effective.

Except for one thing: I still hold that no matter how much this kind of language is used in everyday speech by ordinary people, I still object to its use in advertising, whether or not I “remember” it or “pay attention to it.”

Who wants to see a giant billboard in your face while you’re blithely driving somewhere in which some unshaven slob is described in huge letters as a “total dick”? Gee, let me mark my calendar in anticipation of watching this show about a total dick. I can’t wait to keep company with this guy for an hour.