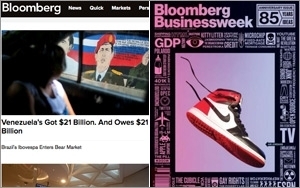 The Web sites of Bloomberg Businessweek and Bloomberg News are merging next year, creating a single super-channel for business news, commentary and related content.

Bloomberg Businessweek will continue publishing as a stand-alone print magazine.

The merger was first reported by The Financial Times.

Bloomberg Media Group CEO Justin Smith told FT that the merged site will be the company’s online flagship: “It's going to be the broadest-facing brand, like Businessweek is in magazines.”

Bloomberg TV is said to be the next candidate for an overhaul, with a new look also based on Bloomberg Businessweek’s aesthetic.

The shakeup comes amid a number of other major moves at the multimedia business news and information publisher. It was announced in September that founder Michael Bloomberg was returning as CEO, after a 12-year hiatus when he served as mayor of New York City.

In May, Bloomberg launched Bloomberg Politics, a multiplatform political news hub devoted to national and state politics, including a new digital site on the Bloomberg network and a new daily TV show that also streams online. And in November, Bloomberg inked an exclusive partnership with adMarketplace to serve targeted text ads from brand advertisers on Bloomberg.com. The exclusive partnership with the search platform replaced its deal with Google AdSense.

Not every new venture has been successful. Bloomberg News axed Current, its social discussion platform, in September.