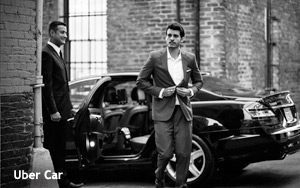 Last month, Franken asked Uber CEO Travis Kalanick to answer a host of questions about how the company draws on users' data, including how it uses the “God view” tool, which allows employees to track the precise locations of passengers who are using the car service.

The lawmaker said this week that he was “concerned about the surprising lack of detail” in Uber's response. “Quite frankly, they did not answer many of the questions I posed directly to them,” he stated.

Franken seems especially troubled by Uber's failure to clarify some of the vague language in its privacy policy, which says that companies can only access riders' data for “a limited set of legitimate business purposes.”

Franken said this week that Uber has yet to shed light on that topic. “It still remains unclear how Uber defines legitimate business purposes for accessing, retaining and sharing customer data,” he stated. “I will continue pressing for answers to these questions.”

The lawmaker also released Uber's initial response, authored by Katherine Tassi, managing counsel for privacy. She wrote that the “God view” tool is “essential” to the company's operations. “If there are rides being requested in an area of town with too few vehicles, Uber can send messages to drivers letting them know that there are potential riders in that area,” she wrote.

Franken, who also has criticized companies for tracking consumers' locations in retail environments, is pushing for legislation that would give consumers more control over the collection and use of their geolocation data.

Tassi also said that God view also is used for fraud prevention. She added that the tool has “sometimes been shown to third parties,” but that the company now displays the information in a way that makes personal data “inaccessible.”

Three years ago, entrepreneur Peter Sims blogged that the company disclosed his whereabouts to a roomful of party guests in Chicago. “The party featured a screen that showed where in NYC certain 'known people' (whatever that means) were currently riding in Uber cabs,” Sims wrote at the time.