The Year In Review: Tragedies In The World Of Comedy 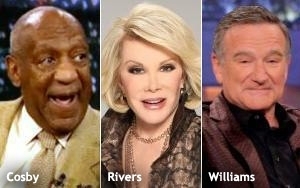 Comedy took it on the chin this year -- and I’m not referring to Jay Leno leaving “The Tonight Show” either.

The tragedies and travails of some of our most iconic comedians were among the top stories in TV and all of entertainment in 2014. Robin Williams shocked us all by committing suicide, Joan Rivers died apparently from a botched medical procedure, and Bill Cosby became embroiled in an ugly sex scandal. As the year comes to a close, his reputation is in tatters.

Williams killed himself two months after his CBS series, “The Crazy Ones,” was officially cancelled. Rivers’ sudden death left a vacancy on “Fashion Police,” which will now become a series of intermittent specials with Kathy Griffin. Cosby was supposedly developing an NBC sitcom in which he would have played a grandfather dispensing sage advice to his younger family members. In the wake of these rape allegations, this sitcom won’t be happening (not that it had much chance of happening anyway).

Speaking of cancellations, this year saw the emergence of a new, unprecedented reason for a show to be cancelled when TLC learned Honey Boo Boo’s mother was dating a convicted child molester (although Mama June denied it). Before we knew it, Honey Boo Boo -- TV’s child-star phenom of 2012 -- was gone.

Leno left and David Letterman announced his retirement, setting up another round of late-night musical chairs in the coming year. ABC remade “The View” and Katie Couric’s afternoon talk show bit the dust.

Ad-supported TV seemed to become even more permissive this year (as if this was even possible). “Sons of Anarchy” pushed the boundaries of sex (heterosexual and transsexual), nudity and violence; “How to Get Away With Murder” pushed the envelope on gay sex; and more naughty words became permissible for use on television, particularly on basic cable.

The only people who seemed to care about this anymore were a handful of self-appointed watchdog types such as the Parents’ Television Council and certain TV columnists who continued to harp on this topic again and again, but to no avail.

Network TV’s ballyhooed enthusiasm for live events was deflated somewhat by two of them: Nik Wallenda’s tightrope walk between Chicago buildings last month, seen on Discovery; and this month’s “Peter Pan Live” on NBC. Each of them drew about half the viewership as similar events the year before (Wallenda’s tightrope walk over a small section of the Grand Canyon and “The Sound of Music” on NBC).

But live sports continued to reign supreme -- especially the NFL, despite a series of headline-making domestic-violence incidents involving NFL players just as the new football season was starting last summer. Among those that benefited from the NFL’s continued strength: CBS, which scored with Thursday night games this fall.

In the past year, television continued its migration toward personal devices via various TV Everywhere scenarios. CBS and HBO took the idea a step further with distribution systems that would bypass local cable providers altogether -- going “over the top,” so to speak, and thus leading to the coinage of a new acronym in the glossary of TV jargon: OTT.

With TV being viewed everywhere (or so it seemed), and so many shows being watched at times other than their pre-scheduled time periods, the need for more accurate audience measurement that would encompass all of it became even more acute. Among the innovations announced by Nielsen: In the coming year, they will begin to phase out the old paper viewing diaries that – believe it or not -- are still in use in more than 150 television markets.

As for the “best and worst” shows of 2014, the year lacked the kind of show that instantly rises unanimously to the top of a critic’s end-of-year Top Ten list -- like “Breaking Bad” the year before.

This year seemed like the year of the abbreviated season. Favorites such as “Downton Abbey” and “Mad Men,” and not-so-favorites such as “Boardwalk Empire” and “The Newsroom,” arrived and soon departed after a half-dozen episodes, give or take – leaving a viewer vaguely dissatisfied and hoping for more -- and better -- in the new year.