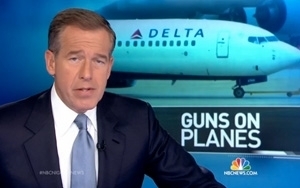 Brian Williams is about to conquer another medium.

"NBC Nightly News With Brian Williams," which the network says is the most watched evening newscast in the U.S., is now available to SiriusXM subscribers.

NBC News kicked off this week by announcing that Brian Williams, who has sat in the anchor chair for 10 years, is renewing his contract. Williams’ broadcast is averaging slightly more than 9 million viewers this TV season, which NBC notes is its biggest audience for the start of a season in nine years.

The week of December 15-19 also marked "NBC Nightly News' 275th consecutive week at No. 1 in overall audience, with its biggest total viewer advantage in fourth months over ABC.

NBCUniversal News Group and SiriusXM also broadcast dedicated channels, including CNBC, a global leader in financial news (Channel 112), and MSNBC, where listeners can find in-depth analysis of daily headlines and informed perspectives on the political news of the day (Channel 117).