Annual 'Kennedy Center Honors' Is One Of TV's Retro Faves 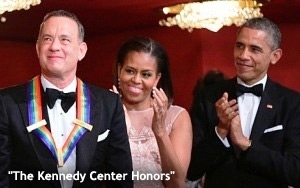 While watching a preview DVD of tonight’s annual “Kennedy Center Honors” on CBS, I was tempted to consult a calendar to see what year it was.

That’s how old-fashioned this show seemed to me. At one point, during the tribute segment for honoree Tom Hanks, song-and-dance man Martin Short broke into a rendition of “Yankee Doodle Dandy” that was so corny it would not have seemed out of place airing in almost any decade since the dawn of television.

The show had me thinking about other shows on TV that remain stubbornly the same as they’ve ever been, despite the many ways TV has evolved since they first came on the scene. Here they are -- some of TV’s retro favorites.

“The Price is Right” / “Let’s Make a Deal” (CBS): A viewer abducted by aliens in 1977 and then delivered home to Earth in the present day would instantly recognize both of these shows, now seen mid-mornings on CBS. “The Price is Right” has long fascinated me, due mainly to a “look” that seems largely unchanged since the 1970s -- from the games (“Plinko,” “Grocery Game,” “Punch-A-Bunch” and all the rest) to the color palettes and ’70s typefaces. And what about the giant prize wheel? Has that changed one bit since 1972? As for “Let’s Make a Deal,” the show is almost exactly like the one that aired back in the 1960s and ’70s, right down to the audience members coming to the show in colorful costumes. Hey, the thing works (evidently), so why change it?

“Jeopardy!” / “Wheel of Fortune” (syndicated): Another tandem of game shows (Oops! Sorry about that; these are technically “quiz” shows, not “game” shows) are as unchanged as “The Price Is Right” and “Let’s Make a Deal.” That’s especially true for “Wheel of Fortune,” which might literally be TV’s most recognizable show or more to the point, most recognizable brand. From the studio audience reciting “Wheel! Of! Fortune!” in unison to Vanna White in a ballroom gown “controlling” electronic letters (but not really controlling anything) to Pat Sajak “interviewing” the show’s contestants about their spouses, watching “Wheel of Fortune” is like slipping into your favorite sweater. It’s that comfortable.

While “Jeopardy!” at least redesigns its sets every once in a while, the one thing that strikes me most about “Jeopardy!” is the consistency of its difficult questions. Sure, I know that on some days, when you’re playing at home and getting a lot of them right, it may seem like they’ve made it easier. But then come days where your percentage of success just plummets and you realize this is one show that separates the relatively smart from the very intelligent. How they manage, year after year, to maintain the huge popularity of this show, despite trafficking in cerebral subjects that are not necessarily accessible to the average person, is one of TV’s most enduring mysteries. May it remain that way forever.

“Maury Povich” / “Jerry Springer”  (syndicated): While certain game shows and quiz shows rank high on the list of shows that have remained virtually unchanged for decades, Maury Povich’s and Jerry Springer’s “talk” shows (both from NBC Universal) have remained consistently unaltered, basically, for the better part of the last 15 years. Both shows are throwbacks to an era -- the 1990s -- when the excesses for which they are both now famous were new and believe it or not, controversial in a television world that was a lot less permissive than it is today.

The recurring theme for which “Maury” is best-known: Sorting out maternity and paternity issues among people who don’t know which child is whose, through the application of paternity tests (followed by lots of shouting, if not all-out brawling, after the results are revealed).

For “Jerry,” the repeating factor is: Brawls -- also stemming from complex relationships. Once upon a time, the brawls on “Springer” raised eyebrows. Today, eyebrows would be raised only if the brawls ceased.

Local newscasts, infomercials and televangelists: In their weird, comforting, familiar way, these staples are the backbone of television -- forms of programming that have been around virtually since the beginning and still going strong, for all intents and purposes. When or if these ever begin to disappear from TV, then I’ll know that the end of television, at least how the word “television” has been traditionally defined by a now-aging generation, is near.

“The Kennedy Center Honors” (CBS): The whole thing seems like it sprang out of the Lawrence Welk era -- everyone in tuxedos and evening gowns, and the honorees sitting stiffly with these medals around their necks in a regal box with the President and First Lady. Remember when being honored by the President was something to aspire to? Maybe it still is, although I doubt I will ever experience its pleasures. This year’s honorees are Sting, Tom Hanks, Al Green, Lily Tomlin and ballerina Patricia McBride. Yes, this annual event still honors ballerinas, cellists, opera singers and the like. And if that’s not a throwback to some lost era, then I don’t know what is.