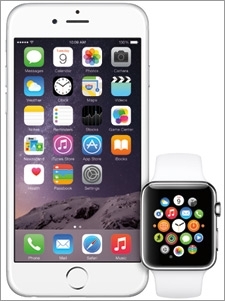 I didn’t even need investment bank estimates and Kantar’s latest numbers to tell me it was a blockbuster for Apple this holiday. I use my “Mom-ometer.” Even my mother got an iPhone 6 for Christmas. My mother -- who still has my father print out messages from their joint email account. Because it is just like mail, right? You are married so you only need one address, right?

Sorry, got stuck on the Mom-ometer.

But Kantar’s latest World Panel report on smartphone sales the three months ending in November does offer some important detail about the scope of this market share shift and the damage it is doing to both Android and Samsung. In all polled countries worldwide except Japan, iPhone 6 and 6 Plus dominated. Apple grew smartphone sales share  everywhere. In fact, Andorid’s share of the new phone market dropped in Europe and even in the U.S., which showed the first decline for the Google OS since September 2013.

Motorola, on the other hand, did benefit from its very good Moto X model and value-driven Moto G, which helped it grow share. In Europe Android still owned overall market share of sales, with 69.9%, but that was down 3.2% from last year and down a larger 6.7% in the U.K. The two new iPhones helped Apple nab 42.5% of UK mobile sales in November, up 12.2% in share.

How do these numbers affect the market overall? First, mobile means bigger now. The move to larger screens even on standard smartphones is more bankable for designers. All of the key aspects that help lead to better marketing effectiveness – larger creative, more utility, closeness to desktop usage patterns – likely lead to better conversions on mobile.

The damage to Samsung is acute, and in turn it nicks Android. For short while it looked as if the Android OS had a flagship phone -- the Galaxy series -- that at lease helped define and emblemize the category. Not so much anymore. Android feels more fragmented than ever.

Apple Pay has a remarkably large addressable audience now. And Apple is getting a lot of free advertising from all the banks buying media to instruct new iPhone 6 users on this new feature. When competing mobile solutions finally emerge, will they really get this same level of easy market recognition and co-marketing eagerness?

And I expect that all of this heat around the latest iPhones will help stoke interest in Apple Watch, even if most buyers still won’t know why they are getting one. Apple seems to have regained enough of its former mojo to convince us that something magical might happen with this new device.

It goes without saying that Apple had a very good 2014 and seems poised for at least as good a 2015. Still, the big missing piece is TV. Apple TV, sitting without a major update for years, is not morphing into a cross-platform play or great TV 2.0 reboot as once expected. The company keeps piling on more channels, perhaps in the hope that Apple TV will resemble more than the sum of its parts. I have to admit that even in my own usage I find myself accessing Amazon via Roku or Netflix now via its integration with the DISH set-top box. Apple TV is not the hub it once was. Chromecast’s technology works better for me than AirPlay, which just breaks down a lot for me.

Meanwhile, the TVs are getting smarter and, per CES, now incorporating the Android OS. If Apple is going to make a move into the living room it may not want to wait much longer.