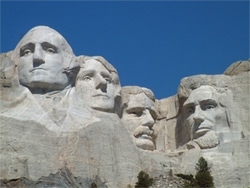 Mount Rushmore National Memorial is a sculpture carved into the granite face of Lakota Sioux near Keystone, S. D. The iconic symbol of leadership and greatness was created in order to promote tourism in the region.

Today, we have our own pioneers and leaders in programmatic brand advertising who could create a virtual Mount Rushmore. Let’s look at each of these individuals in detail.

As the current chief digital investment officer of WPP’s GroupM, Bluman is inherently one of the most powerful and influential people in digital media. Bluman recently shook up the entire digital industry when he announced he would pull GroupM out of the open RTB trading exchange by the end of 2014, thus creating the first premium brand advertising private exchange.  This move created a viewable impression movement for premium brand advertisers that cannot be stopped.  His missions are true and his leadership does not waffle or waver.

O’Kelley finds himself on the virtual Mount Rushmore due to his work as the co-founder and CEO of AppNexus, the world’s largest independent advertising exchange and technology company. He is the visionary coder and former CTO of the first online ad exchange, Right Media. O’Kelley is considered one of the modern day “Flash Boys” who is helping put the technology back in ad tech.

Having been the advertising product leader at Google and the godfather of Ad-Sense -- not to mention the head of Facebook advertising -- Rajaram has taken “dark horse” technology companies into the lead with premium digital exchanges.  He has always been a brand advertiser as much as he has involved himself in direct-response products.  Rajaram has been considered the creator of the “third medium” brand advertising (not search, not TV).

Goodhart was not only the founder of the first ad exchange, Right Media, but is the current CEO and founder of MOAT, which has brought the digital industry beyond the click and into brand analytics that measure “attention” and “time spent.”  In its brief history, MOAT has led the industry with viewability and new pricing models for premium programmatic.

Kawaja is the founder and CEO of LUMA Partners, a strategic advisory firm focused on the intersection of media and technology.   Kawaja’s deep knowledge of programmatic has made him the go-to speaker in advertising technology, using humor to educate financial institutions about the industry.

Each of these leaders has personally contributed to and led the fastest-growing part of the digital advertising marketplace.  They have not just talked about the next step of programmatic branding, but walked the walk and moved the marketplace.  There are other leaders, but none as accomplished and driven by brands, automation and the idea of changing the game in the industry they love.