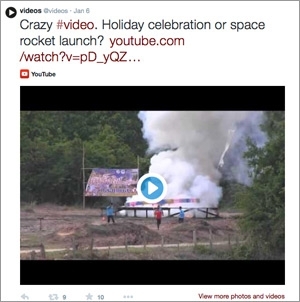 Twitter is developing a new video ad unit to support its soon-to-launch native video tool, according to marketing executives briefed on the initiative.

While details are still being hammered out, Twitter is apparently leaning toward a “pay-for-play” cost structure. It would include a six-second preview video that automatically plays in user feeds and the option to click to view the entire video.

Most likely, ads will only appear if and when users choose to view the full video, sources say.

“They don’t have it totally figured out yet,” said one marketing executive who is privy to Twitter’s plans. Specifically, the microblogging giant has yet to decide exactly when advertisers would be charged for a video “view,” or its cost.

Last November, the social network said to expect a native video feature by early 2015. This week, sources told Re/Code that the new product would debut within a matter of weeks, and possibly include a 20-second time limit on user-uploaded video.

Key to new native tool will be a content discovery (or “surfacing”) feature, Kevin Weil, vice president, product at Twitter, said in November.

“We’re experimenting with better ways to give you what you come to Twitter for: a snapshot of what’s happening,” Weil explained in a blog post. “We can use information like who you follow and what you engage with to surface highlights of what you missed, and show those to you as soon as you log back in or come back to the app.”

Social experts say the new discovery feature holds promise for brands, and the evolution of their social marketing efforts.

“The discovery component will help brands move away from one-off pieces of social media content toward a more serialized strategy,” according to Matt Wurst, vice president/GM of social media at digital agency 360i. “It will help them to thread a narrative.”

The management switch came just days after CEO Dick Costolo expressed his displeasure with the pace of product development at Twitter. While insisting that the company remains on the right track, Costolo told analysts that it is “more critical than ever that we increase the pace of [product and idea] execution.”