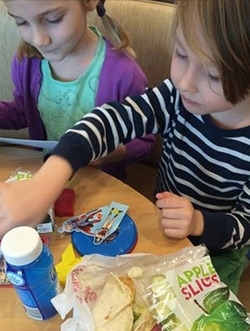 Wendy's has joined McDonald's, Subway, Chipotle Mexican Grill, Arby's and Panera, among others, in dropping sugary sodas as options on their children's meal menus.

Wendy's' move, which is already in effect, was first revealed in a press release sent out by the nonprofit nutrition watchdog Center for Science in the Public Interest. CSPI and other organizations, including MomsRising.org and the Interfaith Center on Corporate Responsibility (ICCR), have been urging Wendy's to make move.

McDonald's agreed in 2013 to drop soda from its Happy Meals menu, and that change goes into effect this year, leaving Burger King as the only one among the three largest burger chains to offer soda with kids' meals.

Wendy's is removing the soda option from its kids' menu boards inside the restaurants, at drive-throughs and on the app used by its U.S. and Canadian customers.

But unlike some fast-food chains (including McDonald's), Wendy's never offered soda as the default beverage with kids' meals, Wendy's spokesperson Bob Bertini told USA Today. Instead, when Wendy's  customers order a kids' meal, they have always been asked to select the beverage they prefer.

"Wendy’s is taking a responsible step forward that will improve children’s health and make it easier for parents to make healthy choices for their children," said CSPI senior nutrition policy counsel Jessica Almy, in a statement. "We hope Burger King, Applebee’s, IHOP and other chains follow suit."

Last year, ICCR, a shareholder coalition that promotes improved corporate practices on social and environmental issues, filed a resolution with Wendy's, according to CSPI. However, ICCR withdrew the resolution when Wendy’s agreed to consider removing sodas from its kids menu and limit the marketing of unhealthy foods to children.

But the groups are still urging Wendy's and other fast-food chains to make more nutritional improvements in both kids' and adult offerings, including serving whole-grain rolls, offering more fruit and vegetable options, and reducing sodium across the board.