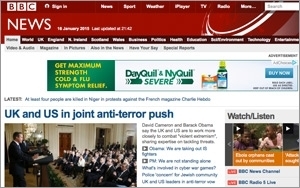 Arguably the world’s most respected news organization, BBC News is hurrying to keep pace with changing media consumption habits with a major overhaul of its Web site and the launch of a new mobile app. They are intended to make its content easier to consume on smartphones and tablets.

BBC News Head of Product Robin Pembroke explained: “The existing products, whilst very successful, have remained largely unchanged for the past three or four years… Our original Web site was not designed with users on mobile or tablet in mind, and we need a cost effective solution that works for everyone, on all devices.”

According to Pembroke, at least half of the BBC News’ online traffic now comes from tablets and smartphones; the proportion is as high as 90% in some countries.

Among other benefits, the new “responsive” Web site offers shorter loading times and more video content, with editorial products available in 30 languages from around the globe. It also allows users to navigate to local news content more quickly than before.

The new app, set to launch later this month, features more video content, a broader range of content including local news, enhanced photo galleries and video playback, most-read and most-viewed sections, and a customizable section where users can curate their own content by topic. Eventually, the BBC may expand these personalization capabilities to the Web site as well.

British news organizations seem to have caught the makeover bug in recent months. In October of last year, Guardian News & Media, publisher of The Guardian, unveiled a redesign for the newspaper’s Web site, including a new high-profile advertising placement that allows advertisers to dominate the Web page without interrupting visitors’ consumption of the news.

In September, The Financial Times unveiled a major redesign of its print edition, including a redesigned front page with prompts for easier navigation, new color graphics and data and a new custom typeface.