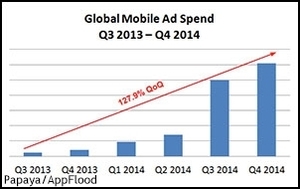 As mobile ad traffic continues to rise overseas, so too does spend -- including programmatic spend.

AppFlood also sees 46% of its Android mobile ad traffic come from Asia, with 18% coming from Eastern Europe and 17% from Latin America. “What is interesting,” AppFlood writes in its report, “advertisers show major interest in Indonesia and India.”

With the company’s roots in China, the report gives us a look at the APAC mobile programmatic market. However, the company does business outside of the APAC and European regions, noting in its report that there is a “huge increase in ad spend, traffic and acquired users in Latin America.” The company adds: “With stats going up every quarter [Latin America] has a potential to be as important as Asia in [the] mobile market.”

Several U.S.-based ad tech firms expanded into or otherwise bolstered their Latin American presence in the past year, including TubeMogul, PubMatic, Rubicon, and Lotame.

In addition, Havas’ trading desk, Affiperf, said it would use AOL’s programmatic ad platform for advertising not just in the EMEA region, but in Latin America and all over APAC as well.