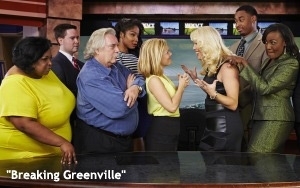 In 2007, the year’s “most pathetic TV show” (as proclaimed by yours truly) was a Fox reality series called “Anchorwoman,” about a 24-year-old former “Price is Right” model with no television news experience who was hired as a reporter and aspiring news anchor by a CBS affiliate in Tyler, Texas.

The show would have followed the woman, Lauren Jones, on her “journey” from blonde beauty queen to TV news anchor if it hadn’t been cancelled mere hours after its low-rated premiere.

The show came to the air with quite a bit of negative baggage, including an editorial in a West Texas newspaper that hammered the station, KYTX, for “bringing journalism integrity to a new low in Texas” and scathing reviews from TV critics, one of whom accused the station of “sacrificing its credibility in order to participate in [a] tacky publicity stunt.”

The negative reaction to that show was so strong that it was easy to conclude back then that you wouldn’t be seeing any more reality shows about local TV news any time soon.

And you would have been right.

It took eight years from the cancellation of “Anchorwoman” to the premiere later this month of a new reality series called “Breaking Greenville” about life in the local-TV news biz.

Coming to TruTV on Jan. 29, “Breaking Greenville” showcases two rival TV stations serving Greenwood-Greenville, Miss. -- the 190th-ranked DMA (out of 210) with 65,200 TV households, according to Nielsen.

On “Breaking Greenville,” the focus is on the news teams of ABC affiliate WABG and CBS affiliate WXVT, who are locked in a battle for ratings.

In the half-hour premiere that TruTV made available for preview, the lower-rated of the two -- WXVT -- has drawn close to WABG in the ratings, a situation that has alarmed WABG news director Pam Chatman.

At a meeting, she asks her staff what they think of the closeness of the competition and one of them, a perky young anchorwoman named Lucy Biggers, offers the quaint opinion that viewers are confusing the two stations on their “questionnaires” -- by which Biggers means the outdated, handwritten Nielsen viewing diaries that are still in use in 150 smaller TV markets (but beginning to be phased out at long last).

Biggers’ age isn’t given on the show but she’s very young -- just out of college, she says -- and not an untypical hire for a small-market TV station since such places are often the entry points for would-be air talent with ambitions to work in ever-larger markets.

Biggers’ own ambitions are lofty indeed. “If I could be Kelly Ripa in 10 or 20 years, I would, you know, have gone to heaven!” she declares. “She’s so adorable, first of all,” she says of Ripa. “She’s a tiny blonde like me! Talks a lot, like me! Basically, maybe I like Kelly Ripa because she reminds me of myself!”

Biggers is co-anchor of WABG’s morning show “Good Morning, Mississippi,” along with meteorologist Christopher Mathis, who seems to be about her age. Their morning rivals at WXVT are Callie Carroll and meteorologist Vernon Turner, co-anchors of “Delta Daybreak.”

On “Breaking Greenville,” WXVT’s veteran anchorman Steve Schill puts the stations’ rivalry in crude perspective. “They dropped the ball,” he says of a news story (a stabbing at a local school) that WXVT claims it covered before WABG could get to the scene. “And now WABG looks like the punk-ass bitches that they are!” This particular utterance represents an unfortunate, jarring low point in a show that was otherwise pleasant.

In next week’s premiere, Callie launches a personal “Get Healthy. Get Fit” campaign in which she vows to lose weight by undertaking a diet-and-exercise regimen on the air in a series of reports to be sponsored by Subway. She even agrees to be weighed on the air (she’s 177 pounds) -- a spectacle, and a threat, that her rivals at WABG take seriously (although they don’t quite know how to counter it).

But the revelation that there is actually a Subway store in this tiny DMA should come as great news to another one of the market’s young air talents, Eric Zernich, a transplant from an unidentified Midwest locale, who complains about the market’s paucity of dining options. “I’m used to going to like a Longhorn [or an] Applebee’s and getting a nice dinner on a Friday [or] Saturday night,” he gripes. “But here there’s not really that kind of option.”

In a scene for an upcoming episode of “Breaking Greenville,” Zernich announces that he has received a possible job offer from a station in Peoria and he’s considering moving. Let’s hope there’s an Applebee’s there.

“Breaking Greenville” premieres on Thursday, Jan. 29, at 10:30 Eastern on TruTV.