Fox's 'Backstrom' Is Gruff, But Not Yet Lovable 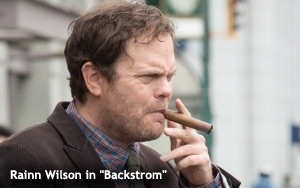 In his new series, “Backstrom,” Rainn Wilson smokes a cigar like a guy who has seen too many old movies with guys smoking cigars.

He’s not a natural cigar smoker, but he’s playing one on TV. The cigar-chomping title character he plays on this new, gloomy cop show -- Everett Backstrom, a detective on the Portland, Ore. police force -- is one of these throwback types: He smokes too much, drinks too much, eats too much and is then warned by a police department doctor that he will soon die if he doesn’t drop all of his bad habits. Plus, he may be deemed ineligible for continuing to work, due to his many health issues.

As you might expect, Backstrom is recalcitrant, stubborn and grouchy. He is pot-bellied and unshaven. He’s a scowler who snaps at co-workers, complains when he eats broccoli, and makes derogatory comments about ethnic groups.

In the premiere of “Backstrom” Thurday night (Jan. 22) at 9 Eastern on Fox, one of the ethnic groups he targets are Hindus (because the police doc is Indian), who he accuses of “making friends” with cows and living in dumps.

The Backstrom character has been adapted from a character of the same name created by Leif G.W. Persson, an author of crime fiction whose stories are located in Sweden -- replaced here by rainy Portland.

In the “Backstrom” novel titled “He Who Kills the Dragon” that Fox sent to TV columnists (and which I partially read), Backstrom is even more bigoted than he is in his portrayal on the TV show. For example, in the book, he is given to referring to black people as “sooties” (as in black soot), which was a new one on me.

That wouldn’t go over very well in Portland or in the TV show, where Backstrom’s colleagues represent various ethnic groups --  most notably a fellow veteran detective who is African-American, played by Dennis Haysbert.

The Haysbert character has known Backstrom for a very long time and respects his abilities, even if their younger colleagues are appalled by Backstrom. In the show, Backstrom is supposed to be gruff, but he’s not very lovable -- at least not in the first two episodes that Fox provided for preview.

However, Backstrom’s unlikable personality is supposed to be offset by his evident brilliance as a detective who requires only a cursory glance at a crime scene to expound on what happened there. Since this is a TV show, he is often correct, of course.

In Thursday night’s premiere, Backstrom eyes the lifeless body of a college student hanging from a noose and concludes that the cause of the boy’s death was not suicide, but murder.

In next week’s second episode, Backstrom is on the trail of a serial arsonist, which pits him against a pair of firefighters who used to bully Backstrom when they were growing up together. This glimpse into Backstrom’s backstory seems to be an attempt to explain how he got to be the way he is. This “reveal” doesn’t make Backstrom any more lovable, but it’s a start.

Anyone who enjoyed Rainn Wilson in “The Office” -- as I did -- will root for him to succeed in “Backstrom.” Like his “Office” character of Dwight Schrute, Backstrom is supposed to be both disagreeable and, after a fashion, likable at the same time.

Here in the early going of this new series, the “gruff” part of the Backstrom character is well-established, while the “lovable” part still needs work.

tv
3 comments about "Fox's 'Backstrom' Is Gruff, But Not Yet Lovable".
Check to receive email when comments are posted.
Read more comments >
Next story loading