Apple Inventor Steve Wozniak, Still A Kid At Heart, Reflects On Apple's Past, Present And Future 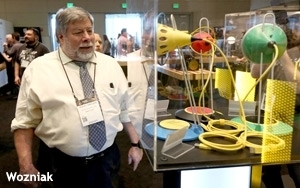 Keep it simple. That's how Steve Wozniak lives life and builds computers, although the augmented reality applications he likes to use are anything but simple, calling out Facebook's Oculus, and Microsoft's HoloLens as "oh-my-God" moments. "I love those augmented reality games," he said to a small crowd at the National Association for Music Merchants following his one-on-one keynote.

Ironically, Steve Wozniak, who is credited with creating the first personal computer, barely mentioned the topics of search engines and ecommerce during a keynote Saturday at NAMM in Anaheim. He would rather go to the store to touch and feel musical instruments, which actually makes Chattanooga, Tenn-based music store owners Darren Patrick happy. "People come into my store and they ooh and aww, whether they buy anything or not," Patrick said. People can't experience the tones, notes and vibrations from a specific instrument online. Not yet, anyway. Early on, Apple did help create a piano-style keyboard that let people play music on the Macintosh.

Reminiscing Saturday with NAMM CEO Joe Lamond during a fireside chat, Wozniak blames Apple II's failure on the Apple III. He said chips were installed in Apple II to disable its business tools, only allowing it to run games. With a flip of a switch after booting up, the user had the option to toggle from Apple II to Apple III, depending on whether the person wanted to use the computer for work or play. He said Apple III missed the mark because it lacked compatible software and didn't get to market quick enough.

Marketing also had too much influence on product development. Apple's angel investor, Mike Markkula, who owned as much of the company as Steve Jobs and Steve Wozniak, said Apple needed to become a marketing-driven company before people would buy into owning personal computers for business and play. He changed the culture of the company. Marketing would come up with product ideas and tell engineering to build it. Wozniak said the model made it feel like engineering became a resource that  the company could buy rather than the creative focus behind the products.

"Marketing came into engineering and said we had to put extra chips in the product, extra money, extra parts to disable the features the business users wanted when it booted up as an Apple II, so they would think Apple II was just for games," he said. "What a horrible mistake. Apple III has all sorts of [features]. It was a good computer, but we couldn't get it into the market fast enough. We made horrible marketing errors over time."

Apple I and II were designed with social goals, to move communication forward. The ideas came from an engineering background -- Wozniak's -- he had spent years as an engineer at Hewlett-Packard.

Wozniak described the design process as similar to the way a musician might create music, but admits the computer needs a package. "If you have a great painting, you need someone who can frame and sell it," he said. "I wanted a computer for myself. Steve Jobs wanted a company to become important to the world. It took him a long time to find it, but he found it."

Wozniak was motivated by making technology for Apple's first personal computer, Apple I, simple and easy to use. He added a keyboard to emulate a familiar tool, the typewriter, and worked toward removing unnecessary computer chips to make the hardware smaller.

Wozniak thinks humans should be the master of computers, not the slave. Ironically, he doesn't have much use for search engines. He likes more personal research, such as walking into a store, looking around, and asking questions. His time spent at Apple, which he created with Steve Jobs, formally ended in 1986. He then went on to invest in musical events, teach fifth grade computers, and went back to school under the pseudonym "Rocky Raccoon Clark" to get his undergraduate degree in electrical engineering and computer sciences from UC Berkeley.