'Downton's' Rude Miss Bunting: Is She The Most Hated Character On TV? 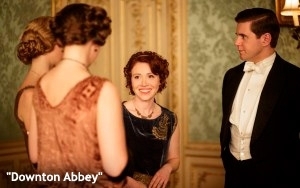 Midway into the “Downton Abbey” season we find ourselves confronted with an incredibly ill-mannered dinner guest.

Enter Miss Sarah Bunting, a liberal schoolteacher who apparently detests the English ruling class and doesn’t mind saying so. In the last few weeks, she has not hesitated to make her feelings known, particularly at the dinner table with the lords and ladies she hates so much, but who have nevertheless graciously invited her to dine with them again and again even when she is repeatedly rude.

This past Sunday, the situation came to a head when Lord Grantham (Hugh Bonneville) exploded at the table after Miss Bunting couldn’t make herself cease criticizing the way he manages his household, in which she happened to be an invited guest.

Among other things, Miss Bunting implied derisively that Lord Grantham didn’t even know the name of his own house’s under-cook, as if this was some kind of a requirement for English lords running huge estates with large staffs. (The charge could be interpreted as an inside joke of sorts: The under-cook is named Daisy, and so is the actress playing Miss Bunting, Daisy Lewis --  seen in the photo above.) It just so happens that the under-cook Daisy is in the midst of taking private instruction “below-stairs” from Miss Bunting -- something Lord Grantham doesn’t particularly disapprove of, although Miss Bunting assumes that he does.

In one of Bonneville’s most dramatic scenes in the entire five seasons of “Downton,” the usually buttoned-up and composed Lord Grantham stood up, berated her, ordered her out of the house and then stormed out of the room.

So what did she do? She just sat there unmoving and making everyone around the table (and anyone watching at home) supremely uncomfortable. Whether she had the decency to eventually get up and leave under her own volition or had to be thrown out bodily was left to a viewer’s imagination.

On the show, the Miss Bunting character is meant to represent a new kind of modern figure of the 1920s (we’re in 1924 this season) -- the outspoken young career woman who insists on being on an equal footing with the upper classes to whom many would still pay deference. And yet, in the wake of her ill-mannered outbursts at the Downton dinner table, she’s gaining no fans among the “Downton” faithful.

“I’m trying to remember the last time I hated a character as much as I hate Sarah Bunting,” wrote one detractor on Twitter. “Miss Bunting is quite rude -- if you hate the rich stop showing up for free dinners,” advised another. Still another Bunting-hater Tweeted this offer: “$100 bucks to anyone willing to ‘disappear’ Miss Bunting.”

A sum aimed at getting rid of Miss Bunting could probably be raised in five minutes on Kickstarter.

Although the character was introduced a year ago in Season Four, she’s really raising hackles this season. In addition to her atrocious behavior at the dinner table, she’s a buttinsky who keeps trying to persuade Tom Branson (Allen Leech) that he should ditch the family.

Branson is the former chauffeur who eventually married one of the Grantham daughters, Sybil, who died giving birth to their daughter. Ever since, Branson has lived on the estate working as the estate’s manager.

It’s a great job and a terrific position, with a group of people who he admitted just this past Sunday that he loves. And yet, this Miss Bunting can’t seem to stop trying to get him to feel about them as she does -- most likely because she seems to have set her own sights on the handsome ex-chauffeur and seems bent on forcing him to choose her over them.

So if this Miss Bunting is such a pain in the neck (not to mention a serial ruiner of dinner parties), why does she keep getting invited back? Because even though Lord Grantham would rather she not be invited, he is too polite to say no when others in his household such as his wife insist it would be ill-mannered not to invite her because she is a friend of their beloved Tom.

In the final analysis, Lord Grantham had every right to explode at Miss Bunting last Sunday. Her crime was not so much in being outspoken, but in violating the code of manners at the dinner table. (Lord Grantham is so well-mannered that he was seen at the episode’s conclusion actually apologizing to Tom for his outburst.)

To Miss Bunting, Lord Grantham might seem like a puffed-up English lord who doesn’t seem to exert much effort to make a real living every day. But as “Downton Abbey” shows us every week, there is a place in the world for good, old-fashioned manners -- whether or not the Miss Buntings of the world approve.

tv
4 comments about "'Downton's' Rude Miss Bunting: Is She The Most Hated Character On TV?".
Check to receive email when comments are posted.
Read more comments >
Next story loading