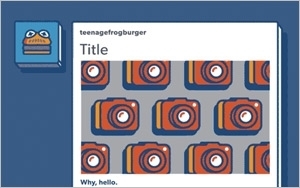 Tumblr on Thursday announced support for long-form content and mobile messaging, among other changes.

“Whatever you want to write -- simple things, flashy things, handsome things, trashy things -- now you can write the hell out of it,” the irreverent social network explains in a blog post. It’s “some real crafty shit.”

While pictures and video are driving social media trends at the moment, there is still demand for blog-like platforms that spotlight the written word.

At least among tech industry insiders, Medium, the content platform pioneered by Twitter co-founder Evan Williams, appears to be gaining traction. Showing business promise, BMW recently signed on to sponsor a collection of posts on Medium.

Since dropping about $1 billion on Tumblr in 2013, Yahoo has made a number of efforts to expand the social network’s appeal among mainstream audiences, creative folks, and marketers.

Just last week, Tumblr launched a Creatrs Network to connect artists with brands. During a test phase, the initiative resulted in successful collaborations between artists and brands like Axe, Gap and Olay.

Yahoo recently said it expected Tumblr to take in more than $100 million in ad revenue — and achieve positive EBITDA — in 2015. Coming from CEO Marissa Mayer during Yahoo's quarterly earnings call, the disclosure offered a rare glimpse of Tumblr’s financial health.