Luxury Through The Eyes Of Affluent Women And Men

Our previous column, “Luxury Through The Eyes Of The Affluents,” focused on how affluent consumers (whom we defined as female and male adults living in households with household incomes of $75,000 or more — about 100 million of them — and who are the largest market segment that buys luxury products and services) currently think about "luxury."

After we asked all consumers to describe luxury in their own words, we asked them to select their number one luxury brand, and we produced two word clouds to illustrate their answers. A number of readers then came back to me and asked me a very interesting question: How would the word clouds look if they had been segmented separately by affluent women and affluent men, instead of showing all affluent adults together?

Do affluent women describe "luxury" differently than affluent men? As the two word clouds that follow clearly show, a number of "luxury" themes are alike among affluent women and men. For both women and men in the affluent marketplace, "expensive" (followed by "quality") is what they think about most frequently when they read, hear, or see the word "luxury." 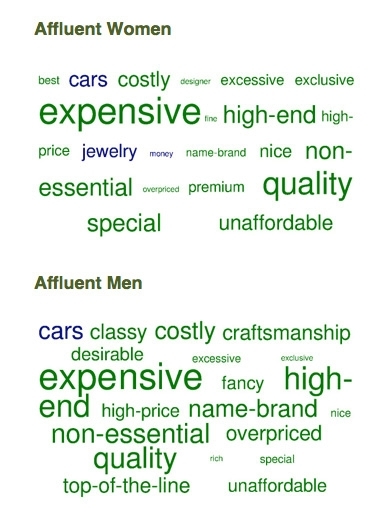 Affluent women include six "luxury" themes that affluent men do not list among their top 20: "jewelry," "premium," "best," "fine," "designer," and "money." And (not to be different from their female counterparts), affluent men also include six themes among their top 20 "luxury" descriptors that affluent women do not include: "top-of-the-line," "classy," "craftsmanship," "desirable," "fancy," and "rich." 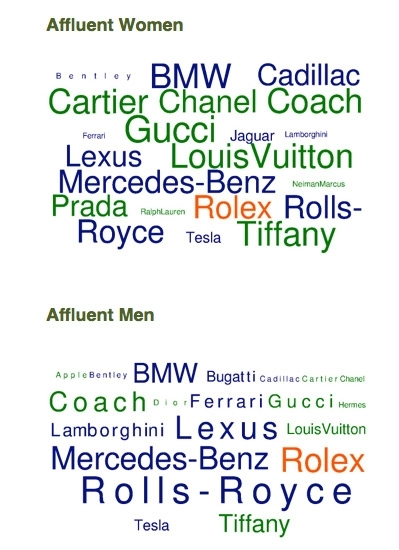 For all affluent marketers and their agencies, we believe the insights based on these four word clouds segmented by women and men should be seen as a battle, not "of," but rather, "for" the two affluent segments, with major benefits coming to those who know how to tap into both their commonalities and their differences to further build their luxury brands.