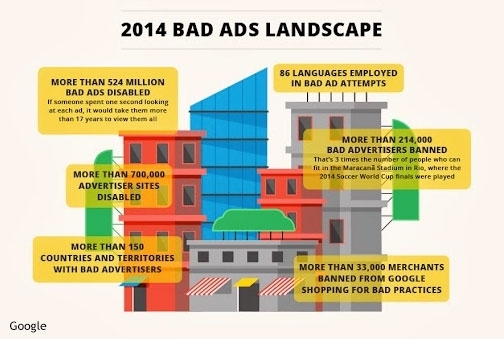 Google disabled over half a billion “bad ads” -- 524 million of them, to be exact -- from its networks and exchanges in 2014, according to a blog post the search giant published this week.

The numbers indicate that “bad ads” are clearly on the rise, but they do need to be put in perspective. Google sees billions of ads per day, and notes in its blog post that “this represents a tiny fraction to the total ads on [its] platform.”

“This trend has been consistent in the last several years and we attribute it to several factors, including: the growth of online advertising overall and constant improvement of our detection systems,” wrote Google in its 2013 roundup.

The 524 million figure can be put in perspective another way. According to Google, “if someone spent one second looking at each ad, it would take them more than 17 years to view them all.”

“This is a constantly evolving fight,” wrote Vikram Gupta, director of ads engineering at Google and author of the blog post. “Bad actors continually create more sophisticated systems and scams, so we too are continually evolving our practices, technology, and methodology in fighting these bad ads.”

A report from Integral Ad Science released earlier this week noted that fraud on networks and exchanges continues to increase, reaffirming Google's findings. Per Integral's report, fraudulent ads made up 14.5% of all inventory on networks and exchanges last quarter, up from 13.7% in Q3 2014. That's one reason why ad fraud is one of the market's main concerns in 2015.