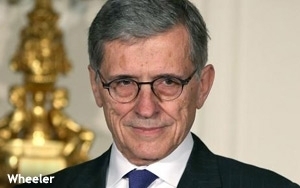 Federal Communications Commission Chairman Tom Wheeler said on Monday that he will propose that the agency declare broadband service a utility, in order to enact “the strongest open internet protections” in the agency's history.

“These enforceable, bright-line rules will ban paid prioritization, and the blocking and throttling of lawful content and services,” Wheeler said in a column published in Wired.

Wheeler added that he will seek to apply those rules to all broadband providers — wireline as well as mobile. “My proposal assures the rights of Internet users to go where they want, when they want, and the rights of innovators to introduce new products without asking anyone’s permission,” he wrote.

The proposal calls for the FCC to reclassify broadband as a telecommunications service, which is regulated under Title II of the Telecommunications Act. But Wheeler only aims to apply some of Title II's provisions, according to a fact sheet provided by the FCC. One of the most important for open Internet principles is a restriction on “unjust and unreasonable” practices. Wheeler also seeks to apply Title II's privacy protections for consumer data, and Title II's provisions guaranteeing fair access to utility poles.

The advocacy group Consumer Watchdog recently asked the FCC to craft an order that would apply privacy rules to broadband networks, while Google asked the FCC for guaranteed access to utility poles.

Wheeler does not seek to apply provisions relating to rate regulations and says the order won't impose new taxes or fees. The proposal marks a radical shift from last year, when Wheeler proposed a set of regulations that would have banned providers from blocking or degrading traffic, but allowed them to forge “commercially reasonable” deals to charge companies higher fees for faster delivery.

Wheeler wrote today that he backed away from that plan because he “became concerned that this relatively new concept might, down the road, be interpreted to mean what is reasonable for commercial interests, not consumers.”

The earlier proposal drew opposition from Net neutrality advocates, including consumer groups, Web companies like Netflix and various trade associations. They argued that allowing paid fast lanes could disadvantage small companies, nonprofits and other groups that couldn't afford to pay for priority delivery.

Last November, President Obama officially weighed in against the original plan and urged the FCC to reclassify broadband as a utility. Since then, Republicans in Congress unveiled compromise legislation that would ban providers from blocking or degrading traffic and from creating paid fast lanes. But that bill also would impose new limits on the FCC's power over broadband.

“If the only objective behind the FCC’s new proposal was to protect an open Internet and establish Net neutrality rules, we could accomplish that through bipartisan legislation and avoid the years of uncertainty and litigation created by Chairman Wheeler’s radical proposal,” Thune stated.

Some Democratic lawmakers who support Net neutrality rules had the opposite reaction. “These rules are a Declaration of Independence for the Internet,” Sen. Ed Markey (D-Mass.) stated. “By applying Title II to broadband, the FCC is ensuring that there will be no Internet fast and slow lanes created by the big broadband barons.”