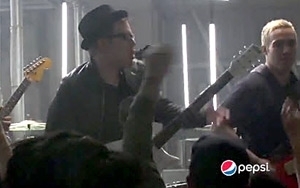 Pepsi will unveil a sweeps-driven music platform called "Out of the Blue" during the Grammy Awards broadcast on Feb. 8.

The brand, a longtime sponsor of the awards, will air multiple ads promoting the new program during the broadcast, including at least two featuring previous Grammy nominee Fall Out Boy (shown) and current Grammy nominee Charli XCX.

For Out of the Blue, from Feb. 8 through May 18, Pepsi will each day give away one "flyaway" trip package to an upcoming music event — two mentioned are SXSW and the 2016 Grammy Awards — for a winner and three guests. The trips will include VIP perks such as backstage passes, premier seats, artist meet-and-greets, and access to rehearsals and sound checks.

Fans can earn chances to win by following @Pepsi on Twitter and snapping and posting a photo of any Pepsi beverage product to Twitter with #OutoftheBlue.

Entering the sweeps will also enable fans to access exclusive behind-the-scenes videos from artists and music events. New ones will be posted weekly on an Out of the Blue site hosted on Pepsico.com.

Pepsi said that it will also release several videos on Grammys night that highlight the careers of nominees, including HAIM, Bastille, Eric Church, Brandy Clark and Sam Smith.

The brand has also recruited Grammy nominee Jhene Aiko as a "correspondent" for the new platrom. Aiko will do artist interviews and cover behind-the-scenes shoots and events, appear at Out of the Blue events, and promote the platform on Pepsi's social media channels.

In announcing the platform's launch, Eric Fuller, director of Pepsi marketing, said that it's designed to "amplify" Pepsi's long marketing association with music and music experiences, which tie in closely with Pepsi's "Live for Now" brand theme.