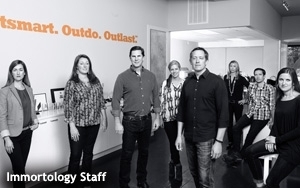 For the past few years, industry veterans David Smith and Bill Harper have been busy freelancing and working on a per-project basis for a vast array of clients including Delsey Luggage, March Networks, and MasterCard Arnold Palmer Invitational. There was so much consistent demand that these two executives began to feel it would actually be easier just to have their own agency.

Now they do. Smith and Harper this week launched  Immortology, based in Chapel Hill, N.C., with a full-time staff of eight and a roster of 15 clients for a total $8 million in billings.

“The world doesn’t need another advertising agency, but it does need a better one," says Bill Harper, Founder, Immortology. "We created a model that is more effective and efficient. The way we staff, partner and produce work all benefit the brand in ways other agencies haven’t, or can’t, or don’t know how to replicate. That’s why we decided to open at all."

Also joining the agency is Consumer Research Leader Rachelle Van Soest, who was formerly owner of Pulp Communications, Baltimore, where she did consumer research and strategic planning for advertisers including Go RVing, Hobo International, the Maryland State Lottery and Procter &Gamble.

And Media Leader Kristin Upchurch previously ran her own media agency and has handled media buying at agencies including McKinney, Durham, N.C., and Jennings, Chapel Hill, for accounts including Audi, Royal Caribbean and Volvo Trucks.

Immortology plans to differentiate itself from other agencies through what it calls a proprietary “Brand Enlightenment” process that relies on research into the client company, its competitive set and its consumers. This result is designed to then become a comprehensive brand platform to help clients “outsmart, outdo, outlast” their competitors.

"The reason now and not 6 months ago is that we wanted to test the model and work out any kinks," says Harper. "Regardless of experience, every new agency has to hit their stride. And we wanted to find the necessary key members to complete the team. It’s nice to promise you’ll have the talent when the time is right, but it’s better to already have them and know what they’re capable of.”

It was easy selecting a name, says Harper. “As a name, Immortology implies the science of building brands that stand the test of time. It summarizes the agency’s philosophy of ‘Outsmart, Outdo and Outlast.’”