Grownups In 'The Slap' Deserved A Slap In The Face Too 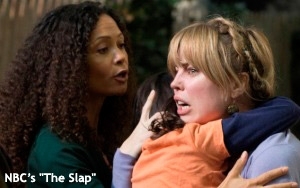 It wasn’t the bratty kid who should have been slapped in “The Slap” -- it was the grownups.

“What a horrible group of people,” I wrote, in one of the few notes I took while watching the premiere episode of this eight-part, “limited” series on NBC last Thursday.

The “slap” in the title refers to an open-palmed blow delivered by one of the grownups in the show to the face of a small, incorrigible son of two other grownups. This grownup (played by Zachary Quinto) slapped the boy after the brat kicked him in the shin following an incident in which the child was threatening to clobber some other kids at a birthday party with a baseball bat.

The slapping grownup wrested the bat from the boy and berated him, which the boy richly deserved. Even before this bat incident, we viewers had already seen ample evidence of the kid’s misbehavior. He was previously seen decimating a collection of prized jazz records and digging up a carefully tended flower bed in the manner of a feral dog trying to unearth a bone.

Far from disciplining him after each transgression, his mother (Melissa George) was seen popping one of her nipples into his mouth to pacify him.

The slap of the title was, understandably, the climactic moment of the first episode. The repercussions of the incident now figure to be the focus of the show going forward. Right after it happened, the boy’s father (Thomas Sadoski), a struggling artist, vowed to sue the deliverer of the slap, a man who we have already learned is rich and holds the kind of conservative political views that we’re supposed to hate him for.

The incident took place in the backyard of a brownstone that looked like it was located in Manhattan’s West Village or some similar upscale neighborhood in New York City such as Park Slope in Brooklyn. In the show, this multimillion-dollar dream home is owned by a bureaucrat (played by Peter Sarsgaard) who works in the city’s department of buildings and his wife (Thandie Newton), a psychotherapist (I think)

Among the things we learned before the slap incident is that the 40-year-old bureaucrat is having an affair with a young woman who looks like she’s barely 20. This revelation marked this guy as a jerk, which made him no different from every other grownup on this show -- the boorish artist with stereotypical liberal views, the sulky serial breastfeeder he’s married to, the rich conservative guy, the bureaucrat’s moody wife who apparently hates the bureaucrat’s parents who are also loathsome (especially his mother).

They’re all specific “types” who reacted predictably to the slap: Granny agreed with the slapper, that the bratty kid deserved it; artist and breastfeeder were so shocked and sanctimonious that they even considered having the slapper arrested; the bureaucrat and his wife were upset this happened at their party, and they asked the various principals to leave.

The show effectively raises all of these questions and asks us to examine each point of view -- none of which are cut and dried. While the appropriateness of disciplining kids by slapping or spanking is a topic that is well worth discussing, the players in this drama were so unlikable that I cannot stomach spending another hour with them.

“They are terrible people,” I wrote in my notes, “and we recognize all of them. They are people we all know and they are us. It is a horrible thing to confront.”

“If this is a modern family,” I wrote of these “friends” and family members, “then I prefer ‘Modern Family’.”

For the record, the premiere episode of “The Slap” drew 5.1 million viewers and scored a 1.1 rating in the demo (18-49) -- fourth place in both categories last Thursday night at 8.

“The Slap” airs Thursday nights at 8 Eastern on NBC.

tv
6 comments about "Grownups In 'The Slap' Deserved A Slap In The Face Too".
Check to receive email when comments are posted.
Read more comments >
Next story loading