'Last Man On Earth': Can This Post-Apocalyptic Comedy Survive? 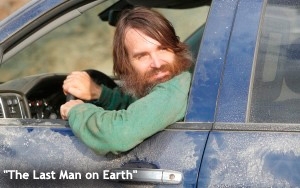 You might wonder where a sitcom can go in future episodes if there is only one character in the entire show.

If you plan to sample this new Fox sitcom called “The Last Man on Earth” this Sunday night (March 1), you might begin to ponder this question not long into the first episode as you observe the titular “Last Man” roaming aimlessly around in search of another human being.

The man -- named Phil Miller -- eventually settles down in a Tucson subdivision in a house and neighborhood in which he is the only resident. Basic survival is not an issue, since the world’s malls, supermarkets, gas stations and convenience stores are all at his disposal and they remain well-stocked with long-lasting packaged foods and all the liquor he can drink. So we watch him eat, drink and kill time in a series of inane, ludicrous activities.

Meanwhile, the only reason given for this man’s solitude is an on-screen notation that the year is 2020, and it’s been two years since the spread of some kind of unspecified virus. No reason is given for the survival of this particular man, who is played by Will Forte.

Forte was in the 2013 movie “Nebraska” with Bruce Dern, and he was great in it. In “The Last Man on Earth,” Forte is tasked with the challenge of carrying this entire TV show, somewhat like Tom Hanks in “Castaway.” The Tom Hanks movie is even acknowledged in “The Last Man on Earth,” with the “last man” naming and befriending a certain inanimate object. In “Castaway,” the Tom Hanks character, marooned on an island, befriended a volleyball he named Wilson.

I would tell you more about the befriended object in this new Fox sitcom, but I’m not sure how much I am allowed to reveal here. The preview DVD from Fox was accompanied by one of those form letters “signed” by three of the executive producers on this show -– Forte, Chris Miller and Phil Lord (from whom the name “Phil Miller” was likely fashioned) -- asking TV columnists not to give away plot points.

Thus, I am reluctant to go into some of the details of these first two episodes. For example, you might be asking: Is this guy really the last man on earth? Do they really mean to present a series in which there’s only one guy in the entire show, week after week after week?

Well, I could answer that question quite easily, but then that would “spoil” the show for you. At least, that’s how these producers apparently feel about it, although to my knowledge, none of them have ever held the job of TV critic, so they cannot know how these restrictions -- which they didn’t really specify in their letter -- can hamstring the writing process.

On the other hand, I’ve never held the job of TV producer, so let’s just call it even. I’ll do my best not to “spoil” anything -- which, by the way, I wouldn’t have done anyway.

As a comedy, “The Last Man on Earth” represents something of a curiosity since it stems, apparently, from a terrible, terrible tragedy -- the unnamed virus that wiped out the world’s population of human beings (except for this guy). Come to think of it, there are no animals glimpsed in the first two episodes provided for preview either -- no feral dogs and cats, no birds chirping in trees, no desert lizards scooting across driveways. (I hope this tidbit doesn’t spoil the show for anyone.)

There are no corpses seen either, even though you’d expect to see them, or at least their skeletal remains, all over the place. And the interiors of houses and stores are incredibly shiny and dust-free for places that have been supposedly abandoned for two years.

The executive producers might be interested in this observation, though: In several scenes, I glimpsed human beings far in the background. I also saw other cars moving on faraway roadways. Hopefully, these glitches -- which were quite visible on the preview DVD -- were caught in post-production and eliminated so they won’t be seen when the show airs this Sunday.

The fact is, I enjoyed “The Last Man on Earth.” To me, the interesting thing about the show is that it doesn’t feel at all like a “network” comedy. It’s a quiet, slow-paced show with no laughtrack.

When I was watching it, I had the feeling that if this strange and offbeat comedy were available on some other channel or content service -- IFC perhaps, or Netflix or Amazon Prime -- it might have felt just right, and been hailed by critics.

If this show represents an attempt by Fox to try and mount the kind of comedy series that would be acclaimed if it turned up on any of those other services, then “The Last Man on Earth” is a very good try.

“The Last Man on Earth” premieres Sunday (March 1) with two back-to-back episodes at 9 and 9:30 Eastern on Fox.

tv
2 comments about "'Last Man On Earth': Can This Post-Apocalyptic Comedy Survive?".
Check to receive email when comments are posted.
Read more comments >
Next story loading