Letterman's Farewell Is Fast Approaching, But Where's The Excitement? 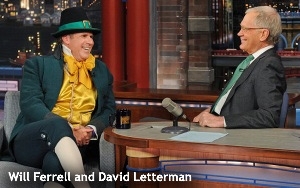 Counting tonight and tomorrow night, only 45 nights remain until David Letterman calls it quits on May 20.

And yet you could be forgiven for not being aware of this because there has been near-zero buzz or chatter about this approaching milestone in broadcast television.

There seems to be no promotional push -- at least at the moment -- on the part of CBS to build excitement and drive viewership for the finale of Letterman’s “Late Show.” His final show will cap an astonishing 33 years in late-night TV (beginning Feb. 1, 1982, on NBC’s “Late Night”).

Not only is that three years longer than Johnny Carson (who spent 30 years as the host of a single show, “The Tonight Show”), but it’s also a run whose longevity is not likely to be equaled either in the foreseeable future, or perhaps ever.

So Letterman’s exit would seem to be the kind of TV event that traditionally galvanizes audiences. And yet a sense of quiet seems to have descended on this pending farewell, almost as if Letterman himself has chosen to avoid it.

With so few shows left (at least 45, and possibly less if Dave plans to take any weeks off between now and May), it’s clear that most of the guests visiting the “Letterman” show these days are in fact making their last-ever appearances with Dave.

Few, if any, of them are overtly mentioning this during their time onstage with Dave, which leads me to believe that Dave and his producers have asked them to steer clear of the subject.

That was not the case in the months leading up to Jay Leno’s farewell from “The Tonight Show” in February 2014. NBC underplayed Leno’s farewell also, choosing instead to heavily promote the pending arrival of Jimmy Fallon, while seeming to mention Leno’s long history at the network only in passing, if at all. (Really, the way NBC seemed to deliberately avoid promoting Leno’s final shows was an insult to him.)

However, various Leno guests made it known they were sorry to see him go. In many “Tonight” shows seen in fall 2013 and the early part of winter 2014, guest after guest noted that they were probably appearing on the Leno “Tonight Show” for the last time, and they didn’t hesitate to mention it while on the air with Jay, who graciously accepted their good wishes.

It's certainly possible that CBS has a plan in place to promote Letterman’s final shows, particularly the ones that will air during the May sweeps -- so we might start seeing a promo push as we get closer to May.

Still, one could argue that such a promo push should already be in full flower as a way of building ratings for Letterman’s “Late Show” right now, and continuing through the finale on May 20. As it happens, the ratings for “Late Show” currently are about on par with what the show has been scoring for the past year or so (if not slightly down).

A noticeable lack of excitement or anticipation in Letterman’s pending farewell, as reflected in the ratings for “Late Show,” was first observed by Broadcasting & Cable's John Consoli in February, when he reported that Letterman's season-to-date ratings were down by about 230,000 compared to the same time period in 2013.

When Johnny Carson said good-bye in 1992, an estimated 50 million people watched. By contrast, 14.6 million tuned in to see Jay Leno say good-bye last year. Carson, of course, was saying good-bye in a much different television era, when broadcast networks and “The Tonight Show” in particular were still dominant. And he was a more dominant (if not beloved) figure than Leno.

Nowadays, with TV viewing so broken up, sliced, slivered and fractionalized, it remains to be seen whether the farewell of a guy like Letterman -- who in so many ways is also a relic of a much different age -- can galvanize audiences and create a “national” viewing experience that will multiply his ratings many-fold on his final night on the air.

I like to think such a phenomenon is still possible, even in this day and age.