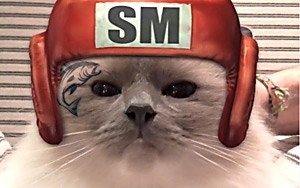 Mars Petcare’s Temptations brand is launching a marketing campaign to back its new interactive toy.

The Snacky Mouse is a weighted, mouse-shaped wobble toy designed to dispense Temptations treats as cats bat, bobble and play with it.

The campaign uses boxing as a comical comparison to the way cats play with the new toy. Creative elements include a print advertisement in the iconic style of a boxing announcement poster, and an online video in which live action cats box various animated opponents.

Snacky Mouse Rumble, a live animation action survival game is being featured on BuzzFeed.com and a link to the online video has been embedded in the post.

The print poster ad will be appearing in national magazines such as Good Housekeeping, Parents, Redbook, Family Circle, InStyle and Us Weekly.

The marketing effort also includes public relations and in-store marketing activations such as retail-specific product signage at shelf, as well as newspaper inserts.

The product is unique to the marketplace, says Temptations Brand Manager Melodie Bolin.

“It incorporates two of cats’ favorite things: playtime and cat treats,” Bolin tells Marketing Daily. “We wanted to create a new and innovative way to make playtime even more irresistible to cats.”

The marketing campaign is aimed at cat lovers everywhere, she adds.

“We hope the interactive aspect of the product encourages cat owners to test out the new toy with their pets,” Bolin says. “We also hope to engage with consumers via our online video, which brings playtime to life and capitalizes on the classic cat vs. mouse concept.”