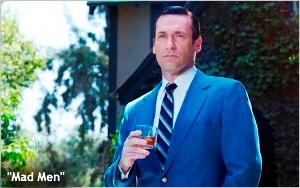 The DVD came with a letter from the creator of “Mad Men,” Matthew Weiner, requesting that we TV columnists refrain from revealing much -- if anything -- about the upcoming season premiere.

“This is the last premiere of ‘Mad Men’ you will receive ever,” said the Weiner letter that arrived a few weeks ago (columns and reviews of the episode were embargoed until today, March 23). “It is also the last infuriating letter from me asking you not to spoil the episode,” he wrote.

The DVD contained the first episode, of seven, that will usher in the final episodes of “Mad Men.” This final half-season begins Sunday, April 5, at 10 p.m. Eastern on AMC.

I wouldn’t call these letters from the show’s creator infuriating (even though they have a tendency to cramp one’s writing style) because I don’t disagree with his no-spoilers request. One of the joys of watching “Mad Men” is having the experience of watching it with little or no prior knowledge of what’s in store. And the last thing I want to do is spoil the experience for anyone in this blog post.

In his letter, Weiner cited four plot points in particular that he would prefer we do not mention. In fact, the mere mention of three of them would, in fact, spoil them, because they would be easy to guess from their brief descriptions. The only one not spoiled by mentioning it: He asked that we not reveal the time frame in which this episode takes place. That’s fine with me.

As is customary for “Mad Men,” this is revealed in the first episode in a very subtle way, via a TV playing briefly in the background on which a presidential speech happens to be airing.

So, with all the things I can’t say, what can I say? Let’s try this:

First, the show is great and well worth savoring. It actually seems reenergized. Among other things, a certain leading male character’s usual moroseness seems to have subsided, at least partly -- which is a very welcome development. Generally speaking (and really revealing nothing specific), the “Mad Men” characters -- at least the ones seen in this premiere episode -- seem, for the most part, to be moving steadfastly into new phases of their lives.

Clients and brands in this new “Mad Men” episode include L’eggs pantyhose, which is presenting a competitive challenge for Topaz, a Sterling Cooper client; and Dow Chemical, which figures in another storyline. In another scene, Don Draper (Jon Hamm) blurts out a famous razorblade slogan of the era: “You’re not just smooth, you’re Wilkinson smooth!” It’s not an amorous scene, so please don’t accuse me of spoiling anything here by mentioning it.

The episode’s sole literary reference is to the John Dos Passos novel “The 42nd Parallel.”  A paperback copy of the book makes a brief appearance. I was intrigued by the book’s inclusion because it has long been one of my favorite novels (it’s the first volume in the Dos Passos “USA” trilogy), but if you’re planning to ask me to interpret its significance in the show, I have no idea.

The episode is bookended – at the start and at the end -- by a piece of music that also hits close to home -- Peggy Lee’s 1969 recording of “Is That All There Is?” It happens to be one of the all-time favorite songs of someone very close to me, so its use in this “Mad Men” episode made watching it an even richer experience than usual.

Let me assure you that these tidbits I’ve mentioned here are not spoilers. since I’ve been especially careful to exclude contexts or details of any kind concerning them.

I will say this: I highly recommend watching “Mad Men” when it starts up again on April 5, especially since there are only seven episodes left of this special series. But you probably didn’t need me to tell you that.

The final seven episodes of “Mad Men” begin Sunday, April 5, at 10 p.m. Eastern. The series concludes on May 17.