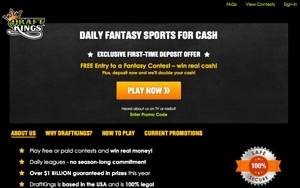 For the second time in a year, the Better Business Bureau's National Advertising Division has told fantasy sports company DraftKings to revise statements on its Web site.

In a decision released last week, the self-regulatory group said DraftKings should stop touting itself as the “largest U.S.-based” online gaming destination.

The ruling came in response to a challenge to DraftKings by competing fantasy sports site FanDuel.com. The latter is the larger of the two companies, according to the National Advertising Division.

But DraftKing contended that it is the biggest U.S.-based site, arguing that FanDuel is based in Scotland.

The BBB's self-regulatory unit disagreed with DraftKings, ruling that FanDuel has a presence in both the U.S. and Scotland. The National Advertising Division noted in its opinion that even though some of FanDuel's engineering staff is in Scotland, most of the company's employees, servers and “consumer-facing points of contact” are within the U.S.

The organization said that DraftKing's boasts were potentially misleading because a “significant portion” of consumers would conclude from DraftKing's statements that FanDuel “had no appreciable presence in the United States.”

“When viewing the claim, consumers could reasonably understand the claim to mean that DraftKings’ website is the 'largest' daily fantasy sports destination available to consumers in the United States,” the opinion states. “However, the parties do not dispute that the challenger’s website is actually larger.”

DraftKings said it disagrees with the decision, but will take its recommendation into account in future ads, according to the opinion.

Last year, in response to an earlier challenge to DraftKings by FanDuel, the National Advertising Division told DraftKings to stop calling itself the “industry leader” and No. 1 destination for fantasy sports. At the time, FanDuel said that it ranked higher in “global popularity” than DraftKings, and had more than twice as many monthly visits, according to data by analytics companies Alexa and SimilarWeb.

Bragging rights to the term “biggest” confers an advantage, because those sites are seen as having more players and prizes, according to the National Advertising Division.