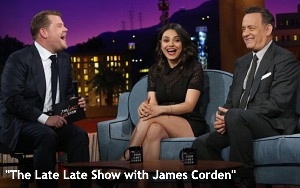 But Corden’s amateur standing as a raw newcomer to late-night TV was all-too obvious when it came to the segments onstage where he was called upon to act as host-interviewer of two celebrity guests -- in this case, Mila Kunis and Tom Hanks.

It didn’t help that the two stars were brought onto the show at the same time and made to sit awkwardly together through about half the show while Corden attempted to interview each of them.

It’s a gimmick that the producers of Corden’s “Late Late Show” have likely devised to help it stand out from the other late-night shows -- having their guests come on together and hopefully engage each other in conversation.

It’s a variation on the old Johnny Carson model of having a first guest remain on the couch during segments with subsequent guests (a tradition that continued in the Jay Leno era of “The Tonight Show”).

But having both of them on at the same time? That didn’t work. In actual practice, Corden only really got around to interviewing Kunis, and the two talked about their newborn babies and what it’s like to be parents -- almost always a dreary topic for late-night conversation.

To his credit, Hanks amiably feigned interest, and interjected himself into the discussion occasionally, but the talk segments fell flat. One reason for this was that Corden comes across as much too awestruck in the presence of his guests -- constantly heaping praise on them, and in the process, overusing the word “amazing.”

There’s no reason for Corden, 36, to put his guests on a pedestal. He’s an accomplished actor and performer in his own right both in his native England and the U.S., where he most recently starred in the movie version of “Into the Woods” with the likes of Meryl Streep.

She even put in an appearance in the best bit on the whole show -- an elaborate, star-studded look at how Corden “won” the job as Craig Ferguson’s replacement on “The Late Late Show” and was then trained to host it by none other than Jay Leno.

The other bit from the show that will likely rack up page views on YouTube today was a more than six-minute “tribute” to the movies of Tom Hanks in which he and Corden “performed” ultrafast scenes from Hanks’ best-known movies (actually, it seemed like all of his movies) -- everything from “Forrest Gump” and “Saving Private Ryan” to “Splash” and “Joe Versus The Volcano.”

In this inaugural edition of the Corden “Late Late Show,” several elements played like experiments that deserve to eventually wind up on the inevitable heap of bits the show’s producers thought would work but should be discarded, starting with the dual-guest scenario.

In addition, the guests were made to walk a gauntlet of audience members as they came on stage, including the indignity of having to high-five some of them and otherwise act as if they’re happy to interact with them. This too should be trashed. At another point, Corden asked his flamboyant bandleader, Reggie Watts, if he had a question for the guests and Watts asked a question that was so nonsensical it doesn’t rate including here. This question-from-the-bandleader bit should also be retired.

As has become traditional in the world of late-night show takeovers ever since Leno “forgot” to thank his predecessor Carson when he took over “The Tonight Show” in 1992, Corden graciously thanked Craig Ferguson. “It is an honor to follow in your footsteps,” said Corden, who vowed to take good care of the show Ferguson hosted for 10 years.

However, the new “Late Late Show with James Corden” is nothing like Ferguson’s show, starting with the fact that Corden has a band and Ferguson did not. The Corden show also has a whole new set and a much different feel from the more subdued (but highly creative) Ferguson show.

The Corden show even has its own bar located at stage right that seems to have been built for the sole purpose of displaying a neon sign for Bud Light, a show sponsor that Corden acknowledged on the air. “We want to thank Bud Light for sponsoring our bar,” Corden said, motioning toward this bar area which then went unused for the entire hour.