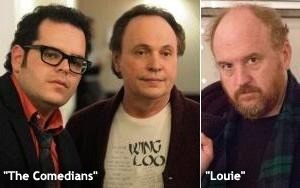 April 9 figures to be a banner day in TV comedy.

It’s the day Louis C.K.’s comedy series “Louie” returns for its fifth season on FX -- but it will also mark the debut of a new comedy series, “The Comedians,” starring Billy Crystal and Josh Gad.

The two half-hour shows will comprise a single hour (“The Comedians” at 10 Eastern and “Louie” at 10:30) that will be the best hour of comedy on TV for however long this tandem lasts.

You’re probably already familiar with “Louie.” It is, without a doubt, the most challenging comedy on television -- tackling topics and situations that most of us wouldn’t think of, and if we did, we would have to seriously question our own sanity.

And yet, Louis C.K. puts these things right out there, seemingly without a care in the world about how anyone will react. Certainly, the point of comedy would be to elicit laughs -- as opposed to, say, revulsion. But on “Louie,” the two reactions go hand in hand. His is the comedy of pain, and it is painfully funny.

Without spoiling anything about the upcoming season (for which FX sent over four episodes, and I watched the first two), I will reveal that some of the storylines in the upcoming season of “Louie” include Louie’s interaction with a pregnant woman on the verge of giving birth and Louie’s struggle to find a men’s room before it’s too late.

As a result of C.K.’s frank and vivid explorations of comparable subjects over the previous four seasons, “Louie” is not for everyone. But mass appeal is not even the goal of most TV shows anymore anyway, unless you’re CBS, for example, and you’re still able against all odds to mount a sitcom such as “The Big Bang Theory” that draws more than 16 million viewers a week.

By contrast, with far fewer viewers, “Louie” has established itself as a hit where it counts just as much these days -- with critics and viewers for whom old-fashioned “network” comedy just doesn’t cut it anymore.

Which brings me to “The Comedians.” I watched two episodes of this new series this morning and I loved every minute of it. It’s a single-camera documentary-style series about the development of an FX comedy series with two mismatched co-stars -- Billy Crystal, who everybody knows, and Josh Gad, a much younger performer who is known by some (he was in “The Book of Mormon” on Broadway, for example), but who is certainly the “junior” partner in this pairing.

Crystal and Gad play themselves, and so do various other celebrities who come and go. In this way, it will remind some people of a number of other shows going all the way back to “The Larry Sanders Show” and including “Entourage,” “Curb Your Enthusiasm,” “The Comeback” and probably more shows that I cannot recall.

While “The Comedians” covers some of the same ground and is made in much the same way as these other shows, it does not come across as either imitative or derivative. “The Comedians” stands all on its own, thanks mostly to Crystal and Gad, who make all the right moves whether their actions are scripted or improvised (I suspect there’s a little bit of both happening here).

And talk about brave: “The Comedians” has a guest appearance by Steven Weber, as an old friend of Crystal’s who is brought in to direct this new Crystal-and-Gad TV show, and who shows up dressed as a woman, having undergone a conversion to the transgender lifestyle. Weber should win an Emmy for it.

FX has an uneven track record with comedy (which isn’t that unusual for any network). Along with the phenomenon of “Louie,” FX is the home of the long-running hit “It’s Always Sunny in Philadelphia” and was home to “Wilfred” (to name a few FX comedies). But it’s also the home of the atrocious and banal “Anger Management” starring Charlie Sheen. Go figure -- everyone has a lapse in judgement every once in a while.

With “The Comedians,” however, comedy on FX takes a big step upward. Mark your calendar for April 9.