Is This The Most Trusted Man In TV News? In Our House He Is 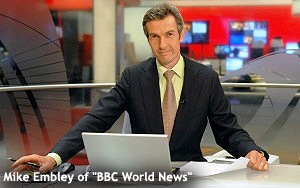 I know what you’re thinking: Why should I watch a half-hour newscast from London airing at a fixed time every night when I can get my news from any number of a thousand sources on the Internet any time I want?

Fine. Suit yourself. It just so happens, though, that not everyone on the planet has the need or the inclination to search for news during the course of his or her daily life. For us, a nightly compendium of news such as the one offered on “BBC World News” is really all we need.

Here in New York, we get our nightly news fix at 11 p.m. weeknights when “BBC World News,” anchored by the impeccable Mike Embley, airs on one of our local public TV stations, WLIW/Ch. 21 (out of Long Island).

With this newscast, there is an unspoken guarantee: You will hear about the top news stories in the world. Period. There will be no interviews with the stars of BBC entertainment shows, no mentions of any Kardashians, and no funny viral videos of the day featuring cats, children or puppies accompanied by an anchor’s invitation to post a comment on the newscast’s Facebook page about the video you’ve just seen.

I watch “BBC World News” almost every night and I’m not even sure it has a Facebook page, although the anchorman does mention his Twitter handle (@BBCMikeEmbley) at the end of every show and invites you, with exceeding politeness, to follow him there.

So what’s so great about “BBC World News”? For one thing, you are always certain to be brought up to speed on the kinds of stories you hear about piecemeal during a typical day, and then seek clarification and details later, when you have the time to take it all in.

Recent examples included the Germanwings airliner crash in the French Alps, the Iran-nuke negotiations, and the massacre by Islamist terrorists at that tiny university in Kenya. On these and so many stories of their kind, the reporting by the BBC correspondents in the field is in-depth and second to none.

The other thing about “BBC World News” is this: What else am I going to watch at 11 p.m.? Local news? You have got to be kidding. Sure, I understand that a local newscast would relegate an evening’s update on a European plane crash or a massacre in Africa to a couple of lines recited by an anchorman or anchorwoman somewhere down in the middle of a news list.

And I get that local stories -- a traffic fatality here, a mugging in a building vestibule there (one preferably caught on a security camera) -- are the meat and potatoes of local TV news. But that doesn’t mean I have to sit through a nightly litany of this stuff.

So thank you, public TV, for making “BBC World News” available to us every night. And thank you, Mike Embley. You’re the man in TV news we’ve come to trust the most to help us make sense of our world.

london, news, tv, uk
1 comment about "Is This The Most Trusted Man In TV News? In Our House He Is".
Check to receive email when comments are posted.
Next story loading