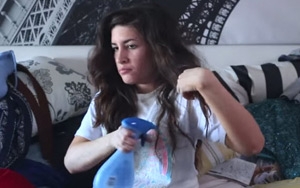 In the latest extension of its five-year-old “You’re Not You When You’re Hungry” campaign, Snickers has recruited 13 popular video bloggers from around the world to offer their personal takes on how things can fall apart when they're hungry.

In what the Mars brand says is a global first, the videos from vloggers with big fan bases in eight different geographic regions — the U.S., U.A.E., Egypt, Turkey, Lebanon, Brazil, U.K. and Puerto Rico — were released simultaneously on YouTube. (The U.K. has five different vlogger entries; see the brand's U.K. site for all of these. Puerto Rico has two: one from Alex Dias, and one from Jay Fonseca.)

"Between them, the international vloggers in this campaign have over 7 million subscribers, generating huge global reach for this innovative digital extension of our campaign,” reported Allison Miazga-Bedrick, director for the Snickers brand.

In the U.S. entry, the usually perfectly-turned-out online style and motivational guru Jessica Harlow offers a tutorial on "How to Let Yourself Go" — starting with living in old sweatpants, and moving on to tips like spraying one's underarms with fabric freshener (shown above).

Harlow's YouTube page also includes a paid plug for a current Snickers contest in which adult U.S. residents can create videos portraying who they are when they're hungry, for a chance to win a grand prize of $50,000 and having their winning video featured on the YouTube home page for a 24-hour period.

Other offerings in the new Snickers vlogger campaign include one from the U.K.'s Ultimate Handyman, who shows the disastrous results of taking on home improvement jobs while hungry (he advises viewers to use toothpaste instead of silicone sealant); and Fonseca's (Spanish-language) video, in which his hunger causes him to veer from his normal political commentary to dispense advice on how to make floral scrapbooks.

The video blog concept was conceived at AMV in London by Alan Wilson & Diccon Driver and globally executed by BBDO.

BBDO created the "You're Not You When You're Hungry" campaign, and its recent hit extensions have included the Super Bowl ad featuring actor Danny Trejo as Marcia Brady, and a back-cover ad on the Sports Illustrated Swimsuit Issue that showed what the front-cover model might look like if her hunger raged out of control (Medusa, complete with snakes-for-hair).

blogging, contest, food, video
1 comment about "Snickers Enlists YouTube Vloggers Around the Globe For Funny 'You're Not You' Takes".
Check to receive email when comments are posted.
Next story loading