Abercrombie Says No To Sex; Now What? 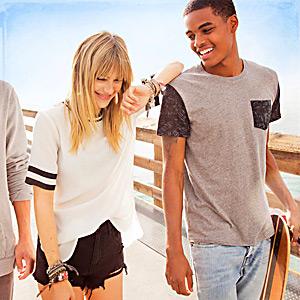 Abercrombie & Fitch just lobbed a PG-13 bombshell into the troubled teen retail segment. The company once known for catalogs so sexually explicit that customers had to be 18 or older to buy one is vowing to abandon “sexualized marketing.” By the end of July, it says the provocative images it’s famous for will be erased from all marketing materials, including in-store photos, gift cards and shopping bags. (Fierce, its fragrance brand, is the exception.)

And even more tellingly, it’s revised its hiring requirements. No longer will it staff its stores with thin, gorgeous (and sometimes shirtless) all-American types. Associates won’t be hired based on their body type or physical attractiveness, the company says, and will be coached to provide outstanding customer service. They won’t have to dress entirely in Abercrombie clothes anymore, and they even get a new title: They are now to be called brand representatives, not models.

While the news comes at a time when other teen retailers are also floundering, it’s been a particularly rough patch for Abercrombie. It still hasn’t replaced Mike Jeffries, the controversial long-term CEO forced to step down late last year. And sales are off sharply, as today’s teens shop more eclectically, choosing among a wider variety of brands — many more value-focused than pricey Abercrombie.

Abercrombie is “between a rock and a hard place,” says Allen Adamson, chairman of Landor Associates in North America, and a leading branding expert. “This is the right thing to do. But it creates a challenge. How do they make their story distinctive?”

The Columbus, Ohio-based company’s announcement acknowledges that nothing will change overnight, and that it “expects that it will take some time for customers to realize the benefits of all of these changes, but optimistic that will see progress as the company moves through 2015.”

A spokesperson for the company says it will continue working with both internal and external marketing groups during the transition.

It’s a classic branding puzzler, says Adamson. “It’s got to become relevant, stay agile and reinvent itself. But in fashion, that’s trickier. Customers can’t tell you what they want. It’s fashion. They can’t see it coming around the corner. So now Abercrombie has to find a way to be edgy and provocative, in a way that’s relevant to 2015.”

In some ways, he says, it is easier for teen retailers. They get a new audience every few years — kids who won’t remember a brand’s older missteps. But for the moment, it’s not at the cool kids’ table. Neither Abercrombie & Fitch or its Hollister brand made the list of preferred brands in Piper Jaffray’s latest survey, while Ralph Lauren, Lululemon, Victoria’s Secret and Vineyard Vines did.

Last month, it reported fourth-quarter income fell to $44.4 million compared to $66.1 million the prior year. And sales fell 14% to $1.12 billion, including a 10% comparable sales decline. Sales of its logoed products were especially hard hit, another sign that teens are definitely over it. “We need to improve comparable sales trends in both our U.S. and international stores, driven by an evolved assortment and an increased focus on the customer experience,” Arthur Martinez, its executive chairman, said in announcing those results.

But Abercrombie is going to have come up with something better than moose-marked hoodies or new denim to recapture its former glory. “Teens tastes have changed,” says Adamson. “Their shopping habits have changed. With brands, they’re more á la carte than full menu. But the starting point has to be how to be relevant, hot and edgy. If they can’t solve that problem, nothing else matters.”

apparel, teens
1 comment about "Abercrombie Says No To Sex; Now What?".
Check to receive email when comments are posted.
Next story loading