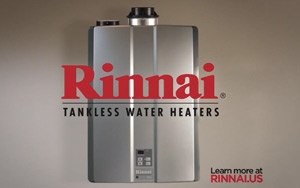 Americans have gotten so used to having to schedule their hot water usage, they may not even realize they have a problem. And that there’s a solution.

Rinnai, a maker of tankless water heaters, is launching a new marketing campaign designed to make Americans aware that the status quo of hot water rationing is no longer their only option. Instead, consumers can have hot water anytime, without fear of it running out.

“Most consumers have a [hot water] problem that they’ve become used to, and they’ve changed their lives around it,” Susan Mittelbrun, vice president of marketing for Rinnai America, tells Marketing Daily. “We have a solution to that problem.”

The campaign includes two television commercials that humorously illustrate the current state of hot water rationing and inefficient use. In one spot a family sitting down to dinner discusses their evening plans: The teenage daughter says she needs to take a shower, the father says there’s laundry to be done, and the mother stresses the need to run the dishwasher. Realizing their limited hot water availability, all three rush to their chores to get them done before the water runs out. “End the hot water wars,” suggests a voiceover.

“When you come down to the number one benefit for us, it’s saving you time and no longer having to schedule your life,” Mittelbrun says. “It’s something most families experience.”

A second commercial depicts a woman leaving various appliances — a hair dryer, stove, blender, sink, lawn equipment — running after she uses it. “If you never turned anything off,” says a voiceover, “it would be just as wasteful as your old tank water heater, constantly heating and reheating water.” The spot goes on to assert Rinnai’s virtues of heating water “only when you need it.”

The television commercials are believed to be the first for a tankless hot water system in the United States. Rinnai is looking to build awareness of the system, which provides hot water on demand, before consumers reach a crisis point of needing to replace a broken hot water heater with the same tanks they already have, Mittelbrun says.

“The challenge is, in the U.S., consumers are not aware of this technology,” she says. “It’s an invisible problem. You don’t think about your water heater until it breaks.”

The campaign also includes radio, print and digital advertising. The television spots will run through the spring (to take advantage of remodeling season) and again in the fall, while the digital will continue year-round. “It’s meant to be an annual campaign with heavy ups during the spring season,” Mittelbrun says.

Rinnai will run the ads on cable news, sports and home-improvement networks, and similarly targeted magazines and Web sites, aiming to reach well-educated consumers with an interest in home improvement, as well as water heater dealers and installers, she says.