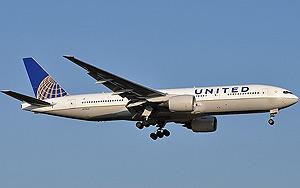 The chefs are creating premium-cabin as well as United Economy meals.

United will also be the official airline of The Trotter Project, a nonprofit organization committed to continuing Chef Trotter's legacy through mentoring and internship programs for youth interested in the culinary arts.

The collaboration will receive advertising support from Conde Nast Traveler, the official media partner of The Trotter Project. Conde Nast Traveler is also producing a short film documenting the partnership from kitchen to cabin, which customers will be able to view on United flights worldwide.

United and Trotter-affiliated chefs plan to team up again later this year as they continue to redesign customers' onboard culinary experience.

United's partnership with The Trotter Project furthers the airline's commitment to the travel experience, with improvements this year to food and beverage service in-flight and in airport clubs.

Beginning June 1, the airline will offer significantly upgraded food and beverage service — including multi-course meals, complimentary beer and wine and a new option to purchase premium snacks — for customers in United Economy on many long-haul international flights.