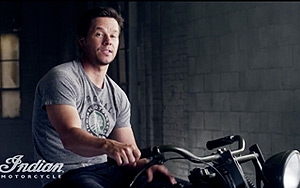 Indian Motorcycle has been on a product offensive since Medina, Minn.-based Polaris Industries acquired the storied brand in 2011, including three new Indian Chief motorcycles last year.

Now, however, the company is letting customer motorcyclists celebrate its famous Scout model, and has brought in its number one fan, actor Mark Wahlberg, to participate.

The company, whose name goes back to the first motorized two-wheeled vehicles on this continent, and a brand that has been resurrected more than once, is going back to the future by letting custom builders create bikes to celebrate important historical moments involving the Scout, which first launched in 1920.

In the video, Wahlberg sits astride the Scout model 741 and introduces the bike, then the view cuts to footage of real battle scenes and photos with his voiceover describing how some 80,000 soldiers rode the bikes into battle in both World Wars. The videos then talk about Indian’s policy of offering deals to soldiers, and the brand’s relationship with the USO.

Indian in February tapped Wahlberg to co-create a line of t-shirts, which the company is selling through its licensed apparel line.

Said Steve Menneto, Polaris Industries VP of motorcycles, in a statement, "The Indian Scout has built a long and storied legacy of racing wins, world records, engineering innovations and industry firsts, and along the way it has won the hearts and minds of fans around the world. Those achievements have materially impacted our current and future direction for the Indian Scout marque."