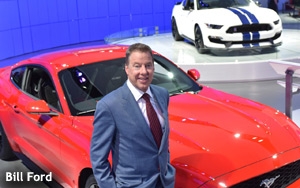 Ford Motor's executive chairman Bill Ford will receive a humanitarian award from filmmaker Steven Spielberg, founder of the University of Southern California Shoah Foundation – The Institute for Visual History and Education. Ford will receive the Institute's Ambassador for Humanity Award at the its annual gala, which happens in Detroit on Sept. 10.

The organization says that Ford will be recognized “for his leadership and corporate citizenry around education and community.” The automaker was also sole sponsor of the 1997 NBC broadcast of  “Schindler's List,” and helped the Institute collect 335 testimonies with Holocaust survivors and witnesses in the Detroit area.

The organization’s recognition of Ford’s contributions has resonance for the company. Henry Ford’s obsessive diatribes against Jews in his Dearborn Gazette, and his participation, via his secretary Ernest Liebold, in the transmission and translation of spurious documents like the “Protocols,” endeared him to the National Socialists and their leader, who kept a framed portrait of Henry Ford in his Munich office.

Yet there is Albert Kahn, the man Ford entrusted to design his factories. Kahn was the son of a rabbi who had immigrated from Germany and he designed, incredibly, around 1,000 buildings for Ford, including a big section of the iconic Rouge River plant. Their relationship remained intact throughout. Also, the company helped defeat the Nazis by manufacturing, among other things, the B-24 Liberator, at its the Willow Run factory.

Under Henry Ford II, the company focused on hiring minorities. And under Benson Ford, in the late 1970's Ford had its first Jewish officer, vice president Mervyn Manning. Mark Fields is the company's first Jewish CEO.

Said Spielberg, in a statement: “Working with Bill Ford and Ford Motor Company to further explore ways to share the work of the Institute with the people of Michigan is a wonderful opportunity. Reaching people when they're young is the key to changing the world with testimony.”

The Institute's work includes promoting some 53,000 audio-visual interviews with survivors and witnesses of the Holocaust and other genocides in its Visual History Archive. One of these is a partnership with Ford around the organization's IWitness educational platform in the Detroit area. The platform takes first-person stories of survivors and witnesses of genocide from the Archive and makes them available to students through educational platforms for computers, tablets and phones.