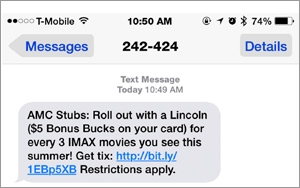 “As part of their effort to promote business, defendants engaged in an especially aggressive and deleterious form of marketing: the transmission of unauthorized advertisements, in the form of 'text message' calls to the cellular telephones of consumers throughout the nation,” Andria Addison alleges in a complaint filed last week in federal court in Minnesota.

Addison alleges that American Multi-Cinema (and its parent company, AMC Entertainment) sent her an unsolicited coupon via text in late April. That message appeared to have been sent to everyone who was enrolled in the theater chain's “stubs” program, according to the complaint. Addison says that she enrolled in “stubs” in 2012, but allowed her membership to lapse the following year.

Her lawsuit alleges that transmitting the message violated the Telephone Consumer Protection Act, which prohibits companies from using automated dialers to send text ads to consumers without their written permission.

The movie chain sent similar text messages “to a list of thousands of wireless telephone numbers,” Addison alleges in her complaint. She is seeking class-action status.

Addison also accuses the Leawood, Kansas-based theater chain of violating the anti-spam law with a mobile marketing campaign that involved offering consumers incentives -- like a $1 soda coupon -- in exchange for their cell phone numbers. “Consumers that provided their cell phone numbers were automatically included in defendants’ SMS program which subsequently sent multiple text messages to those consumers,” the lawsuit alleges.

American Multi-Cinema is just one of numerous businesses -- including Twitter, Yahoo, Facebook and Lyft -- to face recent lawsuits centered on SMS messages.

Some of those companies have argued that their text-messaging systems didn't rely on automated dialers -- which the companies contend must generate phone numbers, as opposed to place calls to numbers that are on a list.

Trial judges have come to different decisions about when SMS-sending equipment meets the definition of automated dialers, and appellate courts haven't yet definitively ruled on the question.