Five Questions We'd Like Answered In The 'Mad Men' Finale 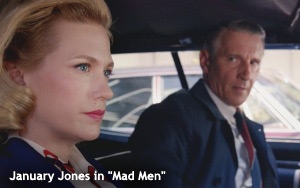 “Mad Men” will have to pack a lot into this coming Sunday's series finale if we are to learn the fates of all of the show's principal characters.

Indications are that this final episode -- the 14th of the show's seventh and final season -- will run for more than hour (the schedule on AMC's Web site has the show running from 10 p.m. to 11:17 p.m. Eastern). The episode is titled “Person to Person.”

Much hangs in the balance for the “Mad Men” characters, not least because last Sunday's penultimate episode concerned itself with so few of them. For all intents and purposes, last weekend's episode was about Don Draper, Pete Campbell, Sally Draper and Betty Francis (formerly Draper). Betty was told she has terminal lung cancer so at least we feel we know her fate -- which is: She'll be lucky if she sees 1971.

But last week's episode neglected so many characters -- Peggy Olsen, Roger Sterling, Joan Harris, Harry Crane and so many others -- that it will take some sort of miracle of storytelling to catch up with all of them in the series finale. If we don't quite learn the fates of all of the “Mad Men” characters -- particularly the ones who have been with us from the beginning -- the hope here is that we will at least get the answers to the following questions:

1.  Okay, Don Draper, now what? In what might be the oddest turn of events in the whole story of Don’s life -- as it has been told to us on “Mad Men” -- he was last seen at the conclusion of last Sunday's episode waiting for a bus in rural Kansas after giving away his Cadillac. It also appears he's done with advertising since he referred to his career at one point in the past tense. So what now becomes of this corporate ad man of the 1960s as the 1970s takes shape? Obviously, he is the show's central character -- which means we have to find out what happens to him, right?

2. Speaking of Kansas, will Pete Campbell move to Wichita? Perhaps it's no coincidence that Don is semi-stranded in Kansas with no hope of transportation other than some rural bus line, while at the same time, Pete seems poised to accept a job with a luxury transportation brand -- Learjet -- in Wichita. Is this how Don will find his way home? On a Learjet provided by Pete Campbell?

3. Will Peggy and Joan live happily ever after with their respective men? The show's two principal career women both have men in their lives at the moment. Or do they? We do know that Joan made a deal to leave McCann in the episode before last. And it appears likely she will stake her future on her California developer boyfriend. However, the last time we saw Peggy, she sashayed into McCann like she owned the place. But back at the beginning of this final half-season of “Mad Men,” she fell in love with the brother-in-law of a (now former) co-worker. Whatever happened to that guy? And will he reappear?

4. Whither Roger Sterling? He's the brash rich kid who basically inherited an advertising agency. In middle age, he had a heart attack and at least two divorces, but he still parties like a college man and exerts little effort in the workplace. He was the character I would have picked to be marked for death before this series came to a close -- not Betty Francis.

5. What will Sally Draper become? For those of us who grew up in the 1960s and ’70s and for whom “Mad Men” elicits an uncanny sense of déjà vu, Sally is really the character we can most identify with. In many ways, she and her brothers are on track to live lives much like our lives turned out to be. Perhaps this final episode of “Mad Men” will give us a look at their future, and in the process, give us a glimpse of how Sally, who would be about 60 years old in 2015, regards her own past and the lost world of her childhood.