Juvenile Seat-Saving Must Cease, And Other Upfront Observations 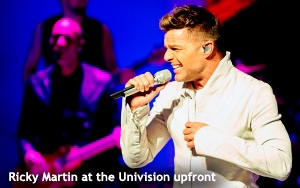 Can we do away with all the seat-saving at the upfronts, please?

There, I said it -- and hopefully it’s something that many are thinking in the wake of the New York upfronts, which concluded Thursday night with the NBC Cable event at the Javits Center.

Don’t act like you don’t know what I’m talking about. It is a huge annoyance and everybody knows it. It is the saving of rows and rows of prime seats for colleagues, “team” members, friends and associates that occurs moments after the doors are thrown open for the upfronts. The seat-saving seems to be a task assigned to younger staff members, who rush, push and shove their way into these upfront venues, perhaps at the behest of higher-ranking co-workers and executives who for some reason can’t be bothered to get to the upfronts on time and find their own seats.

All I know is, I usually arrive early enough to presumably find a decent seat, only to encounter entire rows with coats thrown over the seats and 20-somethings zealously guarding them.

This juvenile practice reminds me of my fraternity days in college when we used to assign the pledges to go up to the football stadium on Saturday morning and save seats for the upperclassmen for the afternoon game. It seemed highly appropriate to me then, but where the upfronts are concerned, it’s a pet peeve of mine -- something I don’t mind bringing out into the open now that the upfronts are over.

Thinking back on the long upfront season, a few random post-mortem thoughts.

1. Seat-saving ceases to be an issue when seats are preassigned. Fox does this routinely for its upfronts at the Beacon Theatre, but few (if any) other networks do it. A few networks and online companies made the effort to set aside a group of seats for the press this year so for a journalist assigned to cover the upfronts, getting a seat was easy -- except in those instances where no one bothered to tell me there was a press section.

2. It is interesting to visit so many diverse venues during upfront season. The ones I liked best this year for their space, acoustics, location and other amenities were the Park Avenue Armory (A&E), the Lyric Theatre (Univision), the Jazz at Lincoln Center space (BET), the Rainbow Room (USA Network’s press upfront event) and Radio City Music Hall (NBC). I don’t especially care for the Beacon (Fox and MTV). I think BuzzFeed should rethink its devotion to the cramped B.B. King’s nightclub on 42nd Street (may B.B. rest in peace) and find a bigger place next year. The Javits Center (NBC Cable) should only be used if all else fails because its location is wholly inconvenient (until they finish extending the subway). And I’m not a huge fan of the space that’s been carved out of the old post office on Eighth Avenue, the one that is supposed to become an Amtrak train station (Nickelodeon, Screenvision).

3. What do I look for as a journalist at the upfronts? Certainly, it’s more than just finding a good seat. For me, the most effective of these upfront events were the ones that managed to entertain but also never lost sight of their selling message. In this regard, two stand out above the rest: Univision’s upfront earlier this week and BET’s last month. At both events, entertainment values were effectively balanced with business considerations because, after all, the purpose of these presentations is to generate sales. Both BET and Univision effectively told their stories and made their cases for why advertisers should be interested in their audiences. And they directly asked for the order too -- a fundamental of the sales process that is a lot less common at these presentations than you might think.

4. As for entertainment, one does sometimes feel lucky attending these events. I loved seeing Dolly Parton perform two songs at the NBC upfront, although you had to wonder why a network aimed at 18-49 viewers was taking up so much time at its presentation with a 69-year-old performer like Dolly. Ricky Martin’s performance at the Univision event hit just the right notes. And while MTV made a gross impression at its upfront with its ultra-violent opening trailer for its “Scream” series, Jessie J gave an electrifying performance that may have been the best seen anywhere at an upfront this year.

See you all next year. And don’t let me catch you saving seats either.

tv
2 comments about "Juvenile Seat-Saving Must Cease, And Other Upfront Observations".
Check to receive email when comments are posted.
Read more comments >
Next story loading