Letterman's Long Good-bye: In Final Show, Dave Did It His Way 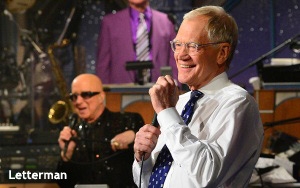 David Letterman’s final “Late Show” was self-indulgent and over-long, but you might also say he earned the right to take as much time as he needed to say his good-byes.

And if the final show, seen Wednesday night on CBS, came across as a mish-mash, then so be it. His fans probably loved it and hung on every word and nuance because with each passing moment, the end was drawing near -- even if it took just shy of an hour and 20 minutes to get there.

Those who stayed until the end were rewarded with the best part of the show -- a performance by Foo Fighters, singing “Everlong,” a rock song whose lyrics include “If everything could ever feel this real forever, if anything could ever be this good again …”

As the song played, hundreds of photos spanning the entire length of the Letterman era were shown in quick succession, in synch with the song. You can watch the segment here.

It was a beautiful montage, one that took considerable time and effort, and it was the one time during the show when the sentiment felt the most real. The montage picked up speed in its final moments -- a race to the finish line that felt as if it was arriving too soon and left the audience wanting more, despite the show’s extreme length. And isn’t that the way every performer wants to leave the stage?

The extension of the show was due to do the length and inclusion of segments that on any ordinary night would have been cut. But on this night, CBS likely gave Dave carte blanche to do whatever he wanted and take his time doing it.

So you had the show's final “Top Ten” list lasting seven minutes -- “The Top Ten Things I’ve Always Wanted to Say to Dave” -- delivered by 10 celebrities. You can watch the final “Top Ten” here.

Letterman’s final “Late Show” opened with the late President Gerald Ford uttering a famous statement in the wake of the Watergate scandal -- “Our long national nightmare is over.” Then, the living U.S. presidents (with the exception of Jimmy Carter) were shown each saying the same thing, this time applied to the Letterman show. You can watch this bit here.

Cavorting with presidents was something that in another era became the trademark of that most establishmentarian of comedians, Bob Hope. In a way, the presidents’ participation in Letterman’s farewell show was a symbol of how far Letterman had come in 33 years -- from the rebellious outsider he once was, who turned the concept of the late-night TV talk show on its head, to the nation’s grandfatherly Comedian-in-Chief in his final season.

In one lengthy segment seen on the final show Wednesday night, Letterman was shown behind-the-scenes with writers and producers preparing for a show. In street clothes and without makeup, Letterman, 68, did indeed look more grandfatherly than we were accustomed to seeing him. While this segment is garnering some praise today for giving his fans a glimpse at the “real” Dave, it was one segment that could have wound up on the cutting-room floor and it would not have harmed the finale one bit.

Dave made heartfelt remarks in which he thanked the show’s staff and declared that he and the show would have amounted to nothing without them. It has long been Letterman’s way to downplay his own contributions to his long success on television. And while modesty can often be seen as an attractive character trait, with Letterman, it sometimes comes across falsely. On the other hand, openly bragging about himself would be unseemly, so you might say false modesty is better than no modesty at all

Among Letterman’s final words were “Thank you and good night.” When he introduced the final segment and Foo Fighters, he noted that it would be the last time he would ever make such an introduction on TV.

The end credits on the final “Late Show” were unusually long too -- listing every member of the “Late Show” staff in individual and group photos that were likely taken especially for use in this sequence. They were a fitting way to end a show in which Letterman repeatedly stressed the familial aspects of producing a show like “Late Show” every day.

And then it was over. For many who wouldn’t think of watching anything else at 11:35 each night, the loss of the Letterman show will require some adjustment. Some will adjust and some will not -- an experience fans of Jay Leno have already had and are still having.

tv
6 comments about "Letterman's Long Good-bye: In Final Show, Dave Did It His Way".
Check to receive email when comments are posted.
Read more comments >
Next story loading